A picnic turned into a proposal for The Talk host Sara Gilbert — and we have more details! 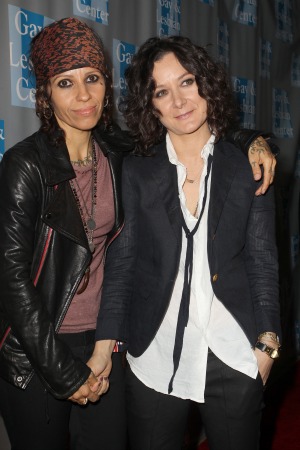 The Talk host Sara Gilbert is engaged! We told you the former actress is set to wed singer/songwriter Linda Perry, and now we have even more deets of the incredibly romantic proposal.

It all started with what Gilbert thought was a simple picnic at an L.A. park.

“We have food and we’re eating it, it’s really sweet and there’s this guy sitting playing guitar, like a street musician, and he starts playing this song that we love, that’s kind of popular right now. And I’m like, ‘Oh, that’s so weird, this is so magical and amazing,'” Gilbert said.

“So, that ends and she’s like, ‘Oh, I’m gonna ask him to play this other song,’ but this other song is really obscure and this guy wouldn’t know it, but magically he knows it… And I’m sitting there thinking, ‘Well, if I ever proposed to her, this would be an amazing way to do it.’ … And suddenly the people picnicking next to us pull out string instruments from under the blanket and walk over and they start playing ‘Love Song’ [by The Cure]. And then a trombone and a saxophone start.”

“So, then she says, ‘OK, turn around,’ and I turn around and our moms are there and a couple friends, and she said, ‘I wanted them to be here, because this is our future,’ and it was so sweet… So, I think that’s it and it’s the most amazing proposal ever and then she says, ‘Oh, there’s one more thing.’ And this guy walks up and she’s like, ‘This is John Waite,’ and he starts playing ‘Missing You,'” she said, explaining that the song has special meaning for them.

“I had always said that I thought ‘Missing You’ should be our song, and she said, ‘That’s so weird, that’s totally a breakup song … So, we had our proposal with our breakup song, which is great,” Gilbert concluded.

Gilbert, who starred on the hit sitcom Roseanne as a child, has two children from a previous relationship, Levi, 8 and Sawyer, 5. Perry is best known as the lead singer of the 90’s band 4 Non Blondes whose hit single “What’s Up?” became a decade’s anthem, and as a songwriter and producer for acts like Christina Aguilera and Pink. The couple started dating in the fall of 2011.

Watch Sara Gilbert announce her engagement on The Talk

5 hrs ago
by Lily Shell