Whoopsie! Brad Paisley’s new song has landed him in a bit of hot water. What’d he do? 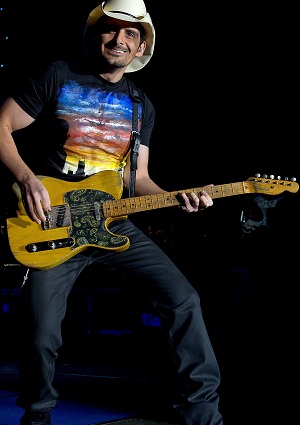 We adore Brad Paisley, so we firmly believe he means well with his new song “Accidental Racism” (a duet with our man, LL Cool J) but it’s caused a bit of controversy and rightfully so. It is, after all, accidentally racist.

The song, off Brad’s new album, Wheelhouse, tells a pretty relatable story. Paisley’s character is a “good ol’ country boy” who walks into a cafe wearing a shirt with a Confederate flag on it. From there, he and LL Cool J discuss the “accidental racism” that comes with seeing someone in a shirt like that or in a stereotypical do-rag.

Speaking of country boys: Can you match the hat to the cowboy? >>

It seems to imply that laying off someone’s jewelry is worthy of forgetting generations of degradation of an entire race. That may be cool for J, but more than half of America would probably feel otherwise. We’re also just going to ignore the fact that in this instance, LL Cool J (Who did a stellar job hosting the Grammys) is tasked with playing the stereotypical ghetto African American in a skully and chains, as if that’s the only way a man of his race would ever dress.

Side note: If they’re going to play up the stereotypical African American, why don’t they do the same for the white guy? Have you ever seen a rebel flag in a coffee shop? Perhaps the rap/twang battle should really take place in a Dunkin Donuts or a BP station.

Wedding playlist for the country couple >>

We really do believe that both parties mean well. It’s 2013 and there is still tension between certain members of our various races. We also think the vast majority of quirks about this song are due in part to taking a little bit of artistic license in an effort to match rhymes and cadence. However, 150 years later the sting of slavery is still fresh enough that both men ought to have known they needed to spend a little more time nitpicking their words.

As for a response to the media backlash, Brad’s Tuesday interview with Ellen DeGeneres explains his feelings on the matter, “I felt like when we were writing this song it wasn’t necessarily up to the media… or talk radio or anything like that to deal with that anymore. I think it’s music’s turn to have the conversation.”

Actually, it’s up to everyone (not just musicians) to address the leftover racism in our country and to continue to work for equality amongst all people. Also, music has had its “turn” in the conversation since before there was even a discussion. Once again, it sounds like no one properly vetted the country singer to make sure what he was going to say matched up with what he meant.

Most important, though: Our founding fathers stressed freedom of speech, so songs like “Accidentally Racist” could be accidentally racist if the singer wanted. If you don’t like the song, you’re welcome to change the station, right? We’re sure the rest of Wheelhouse is way more fun and far less offensive.