Sara Gilbert is another celeb keeping a close eye on the Prop 8 Supreme Court hearings. On Monday, she announced that she is engaged to musician Linda Perry. 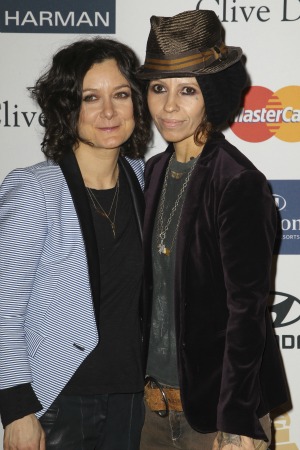 Love is in the air around Hollywood as another couple decides to put a ring on it. The Talk co-host Sara Gilbert announced her engagement to musician Linda Perry on Monday.

Gilbert, who has been very private about her personal life in the past, decided to come forward with her romantic news because of the current political climate.

She told the audience, “I happened to be talking about gay marriage and I thank you all for your support on that issue… That was before I had any idea about any of this. I’m super shy and don’t usually want to tell anything. But I wanted you guys to know because I feel like you’re a part of our family here.”

California’s Prop 8 and Defense of Marriage Act are currently being considered by the Supreme Court and a decision on their legality is expected to be handed down by late June.

The talk show host shared quite a bit about the proposal during the weekday show.

Gilbert described the scene, “I’m sitting there listening and I’m kind of daydreaming and I’m thinking like, ‘If I ever proposed to her this would be an amazing way to do it.’ The people picnicking next to us pull out string instruments from under the blanket, walk over and they start playing ‘Love Song.'”

What the former Roseanne actress didn’t realize is that the entire scene was for her. Perry made sure to have their favorite song by The Cure playing on the string instruments for the proposal.

Then the fun really began for the couple. Perry proposed using T-shirts.

Gilbert said, “She goes to her backpack and she pulls out these T-shirts and the first T-Shirt says ‘will’ and then puts on another T-shirt and it says, ‘you,’ then ‘marry,’ ‘me.’ And the last one’s a question mark. It’s the most amazing proposal ever.”

The couple do have another favorite song which is “Missing You” by John Waite, but that song is better for breakups versus proposals. Perry didn’t want to use it for their big moment, so she brought over Waite to play the song after the proposal occurred and Gilbert said, “yes”.

She told her co-hosts, “We had our proposal with our breakup song, which is great.”

Perry and Gilbert have been dating since fall 2011.