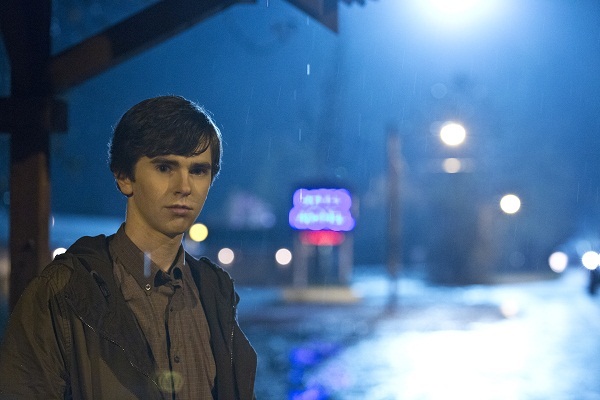 It’s safe to say things have not been going well for young Norman Bates (Freddie Highmore) who is fleeing Arizona with his mother (Vera Farmiga). Aside from covering up the murder of his mother’s rapist, he has now discovered a kidnapped young girl in the basement of a local police officer’s home. The very same cop, Deputy Shelby (Mike Vogel), who has a thing for his dear mom.

Danger certainly lies ahead when he tells his mom about his discovery and she refuses to believe him. It’s a pretty horrific thought, but I think she may have a thing for the handsome young lawman that she’s not admitting. It looks like things are going to get pretty steamy between the two this season, but is she just using him for protection? And is Norman going to freak the freak out when he finds out about the couple? He does seem to have an unhealthy infatuation with his mama (and we all know where that leads in the future).

Worse yet, when Norma does go to explore Deputy Shelby’s basement she doesn’t find any signs of a kidnapped, drugged up teen. Did Norman dream the whole thing? He has been having some crazy hallucinations lately. Maybe he convinced himself it was real because he’s been on the hunt for the missing Asian girl from the pornographic diary he found.

Or, maybe the innocent-faced Deputy knew Norman was snooping around his apartment, feared he found the girl and got rid of her. Ah the mysteries!

Catch all the suspense and bizarre creepiness tonight on A&E!

24 hrs ago
by Kay Snowden