In this girls versus guys survival story, the girls kick butt! 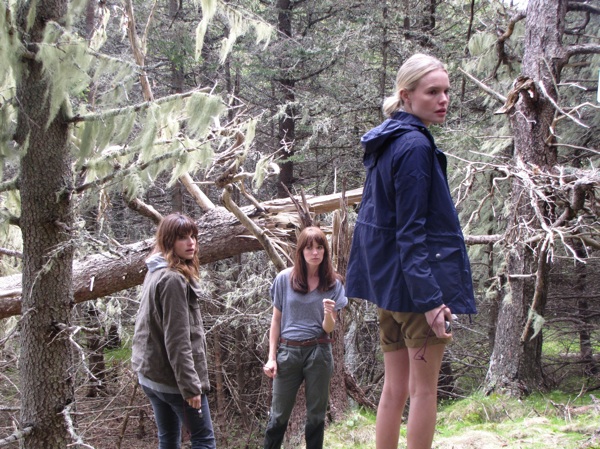 In the new horror thriller Black Rock, three friends Sarah (Kate Bosworth), Lou (Lake Bell) and Abby (Katie Aselton) fight for their lives against one of the scariest creatures on earth: crazy hunters. They decide to spend some quality time bonding at their childhood getaway on a deserted island (because that sounds really safe and fun?), when to their dismay they encounter recently returned servicemen who entertain them in the game of survival: “What are you girls doin’ out here anyways? No one comes out here.” These girls aren’t afraid of adventure. Realizing they are flirting with danger, they stick together in their own Hunger Games battle of girls versus guys.

These hunters may know how to kill, but they haven’t experienced what happens when you tick off a group of loyal females, (and they also haven’t watched Kill Bill). To provoke one of the hunters, Abby (Aselton) challenges him saying, “You gotta tie three girls up to a tree to kill ’em?” Apparently, these guys are scaredy cats. What are they trying to prove by tying up a group of beautiful girls? Then again, they’re probably just afraid of their fierce beauty. I have a feeling they hold grudges from being ditched at the prom, probably for being creepy stalkers.

The temptuous married character Abby pushes the limit by teasing Henry, showing how being too flirtatious can be dangerous. Their little childhood getaway turns into a playground for a game of hide and seek: “If we’re stalked. We stalk back.”

According to Movieweb, co-writer and director Katie Aselton and her co-writer husband try to ditch the notion of chick flicks in this new action thriller. Entertainment Weekly states, “This ain’t your mom’s Ya-Ya sisterhood.” A more serious psychological thriller, the director of Sundance Film Festival John Cooper says, “It gets all deliverance-y.”

What are your favorite chick flick?

Escape to theaters May 17 to see Black Rock.