The MTV Movie Awards have always been looser and more fun than the other movie awards shows. They scored when they hired Rebel Wilson as a host. 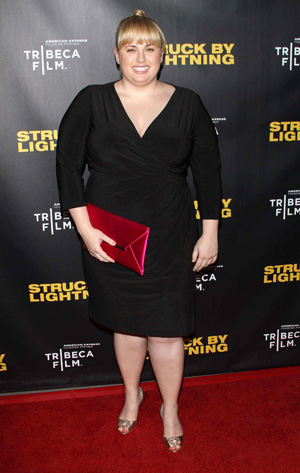 The best thing Rebel Wilson might bring to the 2013 MTV Movie Awards: a reunion with her Pitch Perfect cast members.

“I’ve been talking to the Pitch Perfect cast about reuniting for a number at MTV Movie Awards..aca-let’s CRUSH IT x” she tweeted on March 6.

Just in case you haven’t yet taken notice of the adorable comedienne, you may recall her appearance in Bridesmaids as one-half of the creepy brother-sister bath-taking roommates of Kristen Wiig. Or her scene-stealing expertise in the a cappella troupe hit Pitch Perfect, as the self-named Fat Amy.

By the way, if you did see Pitch Perfect, you know Rebel Wilson is not only hilarious, the girl can sing. Will she bring it to the MTV Movie Awards? Only time will tell.

Can co-host Channing Tatum sing? We might find out on tonight’s broadcast.

Pitch Perfect’s Rebel Wilson sings “The Little Mermaid” for us >>

Jezebel predicts sparks will fly between the two co-hosts: “The sexual chemistry isn’t as strong as it was between Fey and Poehler or MacFarlane and song-and-dance, but it’s still palpable,” Jezebel’s Laura Beck wrote in March.

Also to be seen: Will Wilson use her natural Australian accent? She told Conan O’Brien last summer that she perfected her American accent for Pitch Perfect and other projects by watching American television. Specifically, she watched Here Comes Honey Boo Boo. Now that is an American accent! Also, the kind of amusing thing we like an awards show host to say.