Kathy Griffin confirms that her Bravo talk show, Kathy, is no more. And we all cry. 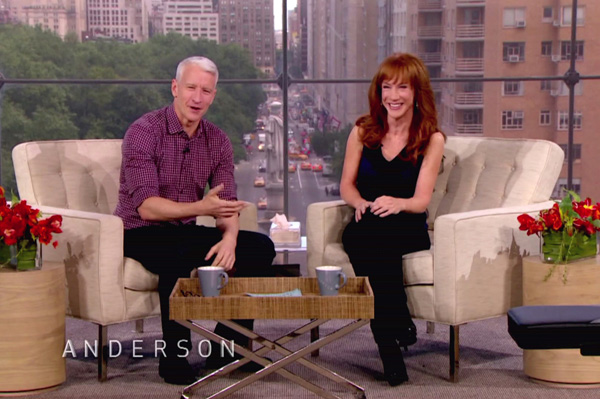 Griffin told a stand-up audience in Cincinnati Friday that the deal was done; when Perez Hilton ran a story about it Saturday, Griffin then confirmed the news with her tweet and a link to the story.

Like the legions of other Griffin-lovers, Hilton was sad to hear the news, calling her show “HIGH-larious.” Griffin fans apparently didn’t watch in high enough numbers to suit Bravo, though “she managed to beat the odds” when the first season didn’t do super-well and return for a second season, which started in January.

Alas, the second season didn’t improve on the numbers, and a bump from its prime time 10 p.m. slot in February didn’t help, Entertainment Weekly points out.

Too bad, since the delicious ginger was the only female late-night talk show host on the air. Sister! We were doing it for ourselves! But no.

Bravo was obviously hoping that Griffin’s talk show would catch fire something like Andy Cohen’s Watch What Happens Live. It certainly was a solid plan; the lady performed well for the network for six seasons on My Life on the D-List. But again: No.

So what’s next for Griffin? She’s doing a bunch of live comedy dates; she just played Cleveland last night. She tweeted that the crowd had “nice open minds:).”

Last month reports surfaced that Griffin filmed a pilot of some kind of top-secret talk show featuring her and pal Anderson Cooper (who apparently doesn’t bear a grudge over that whole crotch-groping thing). RumorFix reported this week that the pilot was pulled together by CNN’s new chief, Jeff Zucker, who was the guy behind the Katie Couric/Al Roker/Matt Lauer trio on Today.

Griffin and Anderson skewering the news? Would you watch that?

It’s also been rumored Griffin is among the contenders to replace Joy Behar when she leaves The View.