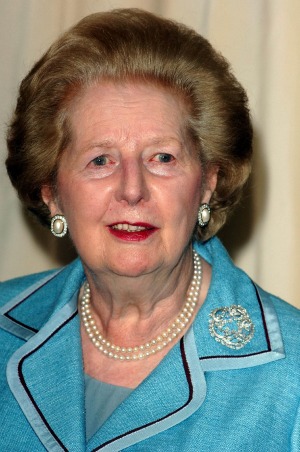 Margaret Thatcher, Great Britain’s first female prime minister and its longest-serving of the 20th century, has died at the age of 87.

“It is with great sadness that Mark and Carol Thatcher announced that their mother Baroness Thatcher died peacefully following a stroke this morning,” confirmed Lord Timothy Bell today. “A further statement will be made later.”

See the trailer for The Iron Lady >>

During her long political career, Thatcher became known as the Iron Lady for her firm hand in guiding her nation back to prosperity with privatization, budget cuts, and limiting trade union influence. She stood up to union leaders and foreign enemies alike — and the opposition always blinked first.

A close friend and ally of Ronald Reagan, she was instrumental in convincing Soviet leader Mikhail Gorbachev to end Communist rule. “Margaret Thatcher was a great politician and a bright individual. She will do down in our memory and in history,” Gorbachev told Interfax. “Our first meeting in 1984 gave the start to relations that were at times difficult, not always smooth, but which were serious and responsible for us both.”

Added Poland’s former president and anti-Communist leader Lech Walesa, “She was a great person. She did a great deal for the world, along with Ronald Reagan, Pope John Paul II and solidarity, she contributed to the demise of communism in Poland and Central Europe.”

In a written statement, President Obama said, “As an unapologetic supporter of our transatlantic alliance, she knew that with strength and resolve we could win the Cold War and extend freedom’s promise.”

“With the passing of Baroness Margaret Thatcher, the world has lost one of the great champions of freedom and liberty, and America has lost a true friend.”

In her later years, Thatcher struggled with a series of small strokes and dementia.