Added bonus: Peter Dinklage stopped by for an appearance. 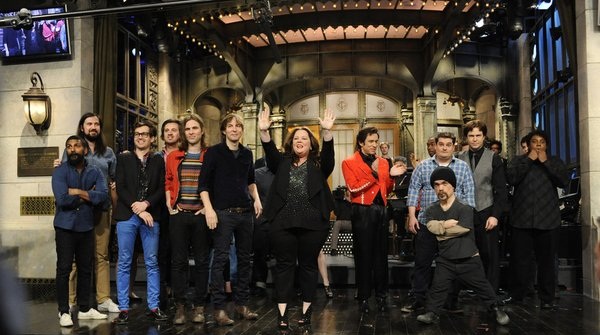 On Saturday, Melissa McCarthy hosted Saturday Night Live for the second time and our favorite new comedian did an awesome job. Of course, it helped that she was supported by some other great visitors.

SNL scored big with Jennifer Lawrence and The Lumineers >>

Most important, during Weekend Update, Drunk Uncle and his “brother”, Peter Drunklage, stopped by. In case you can’t tell from Dinklage’s delivery of George R. R. Martin’s cutting wit in Game of Thrones: Peter Dinklage has an amazing sense of humor. Weekend Update remains one of the funniest parts of Saturday Night Live and Dinklage’s appearance only made it more so. Here’s a clip of our man being downright hysterical.

Dennis Rodman also joined Saturday Night Live with a cold open look at North Korean coverage on C-SPAN. What do Rodman and North Korea have in common? We’re still not sure. We’re equally unsure as to what he was wearing. However, Bobby Moynihan was pretty funny as Kim Jong Un and Rodman’s brief appearance seemed to make the audience pretty happy. Who are we to question that?

The boys were awesome in their skits, but we were most thrilled to see Phoenix. The French dance pop band has been around for years, but they’ve only recently become more mainstream in the United States. That’s due, in part, to a little commercial featuring a Cadillac and their song “1901.” The Frenchmen tore it up with their newest single, “Entertainment.” We even scored a clip for you.

And finally, our host…

During her second stint hosting SNL, McCarthy brought the laughs once again. She opened the show while teetering on high heels and later switched them out for more comfortable kicks… and a suit, to play the part of an angry basketball coach who threw a toaster at one player, chased down others with a golf cart, and eventually left two men with a black eye. We love that the funny lady can glam up in heels for red carpets and the show opener, but also feel comfortable enough to throw on an awful wig and suit and let our her fake-anger on the screen. We’re not sure it was the funniest episode to date, but it still kept us in stitches!