*Warning: Do not read unless you’ve seen Mad Men‘s season 6 premiere, “The Doorway.” Unless, of course, you like spoilers. 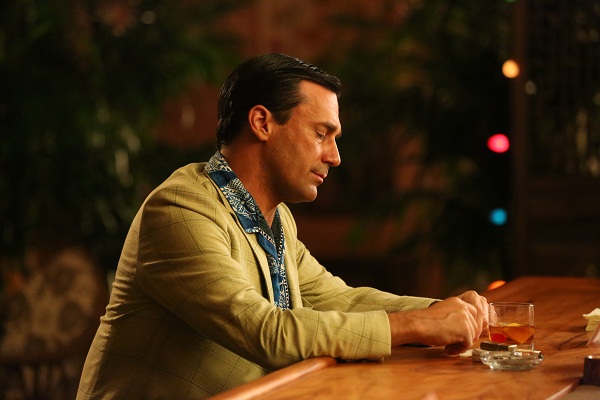 When we left Mad Men‘s Don Draper (with his package) and his cohorts last season, Don’s life was far from perfect and his aloneness was rarely more evident. In season 6’s two hour premiere, he seemed just as alone, despite the constant presence of others. Why? Don lives inside his head — possibly more than any other character on television — and Don’s head is one very dark place.

Don (Jon Hamm) has seen a lot of death in his life. From his mother, to his Lieutenant, to his brother and his “first wife,” then Lane Pryce… it makes sense that he’d be haunted by death. From the very beginning of the season 6 premiere, we know where things are going. The man’s beach read is Dante’s The Inferno for goodness sake. It’s all about heaven, hell and purgatory.

Later, Don pitches an ad to a picky client. The idea, to boost Hawaii tourism, is to show strewn work clothes and footprints on the beach, leading into the ocean. Don means for it to give them the impression of the man freeing himself from the confines of a suit and taking a naked, liberating swim in the Pacific. Everyone but Don can see the ad for its morbid truth. It’s a man leaving it all behind to dive into the ocean and swim until he can’t swim anymore… killing himself. (Just like in A Star Is Born, as Roger recalls.) 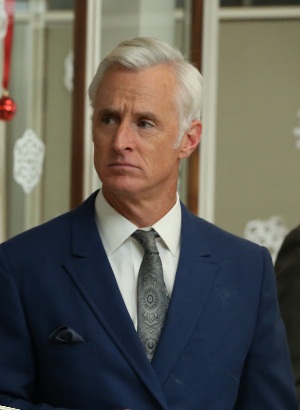 In another instance, Don is made to deal with death when Roger’s (John Slattery) mother dies. Don shows up at the funeral drunk as a skunk. During a meaningful speech by a batty old woman, Don proceeds to blow chunks into an umbrella stand. He’s sick because he’s drunk, but what finally pushes his gag reflex? Is it the overwhelming sweetness as she woman talks about Roger’s mother’s love? (Something Don never experienced.) Is it the fact that he’s already dealing with yet another death? (Only months after his buddy Lane killed himself.) Or maybe that someone else is dying and yet he still remains?

He’s also morbidly curious about what happens. The episode opens with Don’s doorman collapsing and having a heart attack. The man survives, though, and when the boys from SCDP carry home the drunken Don, he becomes fixated on the man. He hammers him with questions about what it was like to be dead. He’s desperate for answers that he never really gets.

Bonus: Bobby seems to be following in his father’s shoes. He liked Sandy’s violin case because it reminded him of a coffin.

And why would Don want to die? He’s successful, he’s had multiple loving wives, a couple of decent kids and at least one really great friend. Simple: That’s what any self-destructive person wants. (I don’t need to remind any Mad Men fans of Don’s various ways of self-destruction, do I?) Though it seemed like his new commitment to fidelity to Megan (Jessica Pare) would be the end of those ways, we all knew it wouldn’t last. Was anyone surprised to see Don in bed with his neighbor’s wife?

Furthermore, no matter how hard Don tries, he just can’t seem to escape his past. Last season alone, there was the man who killed all the nurses whose last name was Whitman, Betty using his old life to try to sabotage his relationship with Sally and his brother’s visitation in the dentist’s office. He must feel like the only true way to escape that past is to leave the present behind, as well. He even (almost) says as much when he tells his mistress du jour, Sylvia, “I want to stop doing this” when she asks about his plans for the new year ahead.

If hell was life as Dick Whitman, could purgatory be life as Don Draper and heaven be leaving them both behind? Are we leading up to that final scene in season 7 when Don, like the man in the opening credits, throws himself from the skyscraper?

Bonus (and completely insensitive) question: Do you think it will be from his own office window or from SDCP’s recently acquired second floor?

If Don’s future looks dark, it isn’t the only thing. While the newspaper that Don scoops up at the start of the new year seems hopeful, we know for sure to plan otherwise. Season 6 begins at the very start of 1968 and history buffs will tell you: It’s going to be a long, dark year.