Luke Bryan won the hearts of country fans when he asked all the country girls to “shake it” — and now he’s reaping the benefits of his hard work with the ACM Awards trophy for Entertainer of the Year. 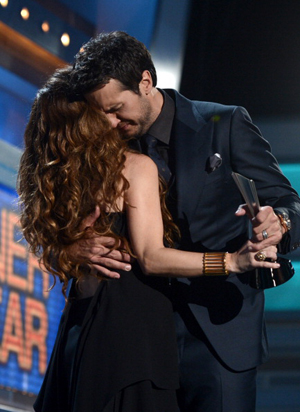 We might love Luke Bryan, but we’ll admit to a bit of surprise when Shania Twain announced his name as the ACM Entertainer of the Year. After all, he had some pretty formidable competition in fellow nominees Blake Shelton, Jason Aldean, Miranda Lambert and Taylor Swift.

And we weren’t the only ones surprised: The 37-year-old singer was also shocked by his win. He even broke into tears before he finally made his way to the stage to accept his prize.

His acceptance speech — when he finally did speak — was pretty adorable.

“This is… I don’t know what to say, you guys,” he finally started. “Thank you guys so much, fans, for doing this to me, thank you so much for making my life what it is. What I always wanted to be was just a country singer that got to ride on a tour bus and show up on a new stage and play music every night… I just started headlining! Every time I step on stage, it is a blessing to me to play for fans… This is the defining moment of my life!”

Bryan wasn’t the only emotional winner of the night. Lambert also broke down while accepting her Female Vocalist of the Year trophy.

“A huge dream of mine came true because I went from a little girl singing in a hairbrush to singing with Reba McEntire and Kelly Clarkson,” she remarked as the crowd cheered.

Shelton also had kind words for Lambert, his wife, while accepting their Song of the Year ACM.

“Last time this happened, you didn’t get a chance to talk, and you’re not going to get a chance either this time,” he joked. “I’ll tell you all something: I’ve learned so much from this human being standing next to me… she blows me away, but as far as standing here right now, I used to think I was a decent songwriter until I started hanging out with her.”