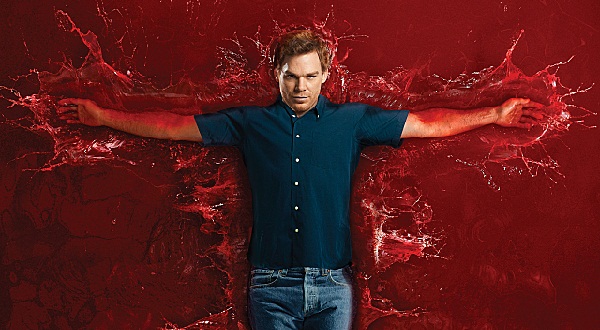 You know that feeling you get when you watch certain movie trailers and immediately know that you do not want to see the movie? Or… maybe you do, despite knowing you’ll be scarred for life. That’s exactly how the new promo for Dexter‘s eighth (and final) season feels.

It’s simple at first: The white paper and the splattered blood turn slowly. As the camera zooms out from the mess, Dexter (Michael C. Hall) speaks:

“I’ve always been a very neat monster. But, lately, the truth has begun to spill and too many people have seen the full picture. I’m losing control and the only thing I know for sure is that it isn’t going to be pretty.”

Zoomed all the way out, the blood splatter forms that “full picture,” which is the silhouette of Dexter’s eerie and demented leer. It’s at that moment that a shudder will surely run up your spine. Your shoulders will pull upward, as if trying to protect your ears from his creepy promise, and your head will sink down as if trying to protect your neck from his butcher’s knife. The simple sneak peek is startling. If the description doesn’t prove it, you can watch it for yourself.

Did you look over your shoulder? We did. Despite knowing that Dexter mostly just wants to kill bad guys, his fondness for spilled blood is creepy nonetheless. Now that too many people know his secret (including us) and he’s worried about his loss of control, will he remain on the straight and narrow (-ish), or will he seek out new targets? We’re afraid to find out… and yet we’re dying to know.

The newest trailer definitely steps up the shiver factor. Season 8’s first trailer featured Dexter’s long list of victims and promised that he wasn’t done. This one, though, has a bit more feeling to it. Maybe it’s Dexter’s voice — or maybe it’s just that blood-shaped expression. Either way, we’re terrified.