TMZ says Berry is going to be a second-time mama thanks to the good work of fiancé Olivier Martinez. It’s a boy. 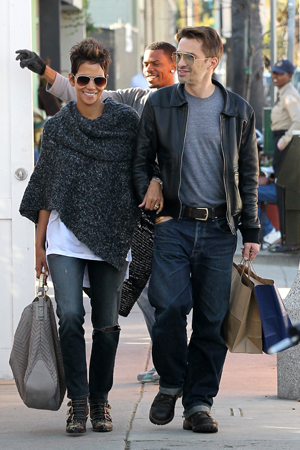 While everyone else was watching Halle Berry in her art-deco-meets-space-opera super-bada** Oscars dress and thinking she looked amazing, Halle Berry was feeling bloated and queasy.

Why? She was already gestating baby two, TMZ reports.

And it’s a boy this time!

Berry is also of course the mom of 5-year-old stunner Nahla with ex-boyfriend Gabriel Aubry, with whom Berry’s current fiancé Olivier Martinez famously came to blows this Thanksgiving during the holiday hand-off of Nahla from dad to mom.

Halle Berry battles with paparazzi as Nahla looks on >>

TMZ speculates that Berry’s pregnancy is around three months along, and also that her condition may be the reason Martinez and Berry reacted so strongly when they and Nahla were photographed by paparazzi at LAX this week.

The family apparently took a delightful spring vacation in Maui (better than Heidi Klum’s Hawaiian Easter, anyway), and had an egg hunt with Nahla on the beach.

When upon their return the photographers swarmed, Berry shouted to keep away from Nahla, and Martinez was so protective that he apparently kicked a photographer; police were called and a report was made but the family was already long gone.

“It’s definitely worth noting… Halle is 46, and Olivier is 47,” TMZ says rather delicately.

I’m just going to leave that there.