We’d give anything to see Kate Middleton’s inbox. The Duchess of Cambridge says her friends “keep texting” her potential baby names. 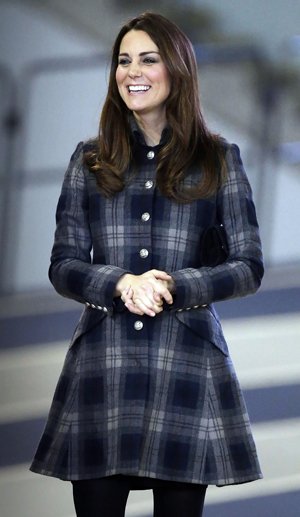 Dear Kate Middleton: Anything but King.

That’s our one and only baby-name suggestion for expecting first-time mom Kate Middleton, who opened up about her pregnancy while visiting the Quarriers Stopover Project in Glasgow, Scotland with husband Prince William Thursday.

Us Weekly reports she had a nice chat with the project manager of the homeless shelter, which houses people aged 16 to 25. Maybe the duchess was thinking about her own teenage-child-to-be?

She revealed her due date: “It’s around mid-July, but apparently babies have their own agenda,” she said, tongue-in-cheek.

Middleton, who Us Weekly said kept her bump covered up in Scotland with a plaid wool coat, also said she was finding it difficult to pick a good baby name. She’s also remained mum on the gender of the baby.

“We have a short list for both [boy and girl] but it’s very difficult,” she said.

Her loved ones are also eager to help. “My friends keep texting me names,” the duchess said.

After the duchess and prince left, Quarriers Chief Executive Paul Wood told reporters that “William and Kate were extremely relaxed and really in touch with the young people and understand the problems they face.”

ABC News reported another nice story about the duchess this week, responding to the letter written to her by a young fan in the town of Grimsby in England, who was unable to meet Middleton during a March 5 appearance there.

“My mum was so excited when it arrived at our house that she brought it into school and the teacher read it out to the class,” said 10-year-old Isabella Clarkson.

Isabella was so thrilled by the letter that she compared Middleton to her late mother-in-law:

“I think Kate is doing all the good work that Princess Diana did and she seems very generous,” she told the Grimsby Telegraph.