The passing of venerable and wise film critic and obviously great guy Roger Ebert is marked by celebrity salutes on Twitter. 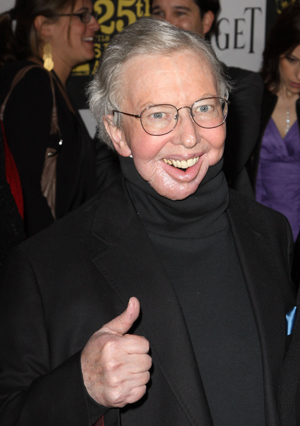 Beloved film critic Roger Ebert died Thursday, and judging from the astonishing number of celebrities who tweeted their sadness at hearing the news, he was as popular with stars as he was with the public.

Comic Patton Oswalt wrote possibly the most touching tribute: “Roger, I hope you’re in an infinite movie palace, watching every film the great directors only dreamed of making.”

“I started watching/reading @EbertChicago in 1984. He was a good man & a fierce advocate for great film,” wrote Rainn Wilson.

Justin Long wrote “Reading Roger Ebert’s reviews as a kid was instrumental in determining what I did w my life. He will be sorely missed.”

Others wrote that they’d gotten bad Ebert reviews, but still loved the guy.

“R.I.P. Roger Ebert. It was a privilege to interact with you. Thank you for the support, the criticism, and the true love for the movies,” wrote Diablo Cody. Ebert was one of the few critics to give her movie Jennifer’s Body a positive review and it looks like she didn’t forget it.

Writer and director David Wain (Role Models, Wet Hot American Summer) wrote, “Roger Ebert was an ongoing inspiration (if not always a fan) to me and I am truly truly saddened by his loss. I will miss him.”

Ebert gave Wet Hot American Summer one star in 2001 and wrote his review to the tune of the classic camp song “Hello Muddah, Hello Fadduh,” admitted he hated it fiercely and that life’s “too short for cinematic torture.” Aw, Ebert, ouch.

Chris Weitz, a producer best known for About a Boy and American Pie, wrote “Rest in Peace, Roger Ebert. You were a gentleman. Sometimes loved my movies, sometimes hated them, but you were always fair.”

Cameron Crowe, who inspired one of Ebert’s most positive reviews ever for Almost Famous (Ebert liked it so much he said he was “almost hugging himself” as he watched it), wrote “Roger Ebert. Clear-eyed dreamer, king of the written word…” and accompanied his tweet with a lovely picture of the young chubby-faced Ebert.

And Mia Farrow referenced Ebert’s painful death and long battle with illness when she wrote, “If cancer came to take me piece by piece, I hope I could summon even a fraction of the grace Roger Ebert showed us, in such abundance.”

See you at the movies, Roger Ebert.