“Love Is All Around” for Valerie Harper and her MTM pals. 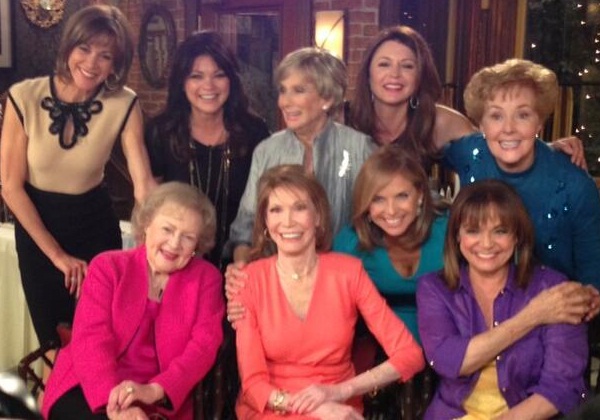 It’s been quite a while since we’ve seen a reunion this long overdue. Adding to the “cool factor” is that this reunion didn’t happen on an Oprah stage but on the set of Hot in Cleveland. For any little girl who spent her sick days watching reruns of Mary Tyler Moore, this one is for you.

TV Land just can’t get enough of Hot in Cleveland >>

The girl gang from Mary Tyler Moore — including Mare and Valerie Harper (Rhoda), as well as Georgia Engel (Georgette Franklin) and Cloris Leachman (Phyllis Lindstrom) — turned up on the set of Hot in Cleveland this week to reunite with each other, as well as Betty White (she played Sue Ann Nivens on MTM) and to film a very special, fun episode of the show.

The appearance comes on the heels of Valerie Harper’s announcement that she has terminal cancer. Although the actress is still looking as gorgeous as ever and the Mary Tyler Moore and Hot in Cleveland crews appeared to be mostly in high spirits, there were quite a few teary moments on the set.

“The tears come up, but then they’re part of the laughter,” Harper said during a press conference. “Did you ever laugh till you cried? That’s been happening a lot. It’s been so full of life and joy and love. And fun!”

According to the interview, the MTM ladies will play members of a bowling team called GLOB (the Gorgeous Ladies of Bowling). The episode, titled “Love is All Around” (like the name of the MTM theme-song), won’t air until Sept. 4. However, it sounds like it will be worth waiting for as the ladies are all focused on making it memorable.

“I’m thinking of this moment and getting my lines right so I support my fellow players and serve the audience who are going to see this really funny show,” Harper explained.

The women of Mary Tyler Moore are all in their mid 70s or older but most of them have continued to stay busy and at least somewhat in the limelight. None more than Betty White, though, whose sometimes naughty comedy has landed her front and center before a whole new generation of fans.

We can’t wait to see how the Hot in Cleveland episode turns out.