NBC’s Hannibal started with a flavorful first episode and left us hungry for more. An FBI criminal profiler gets more than he bargained for when he partners up with Dr. Hannibal Lecter to solve a series of brutal murders. 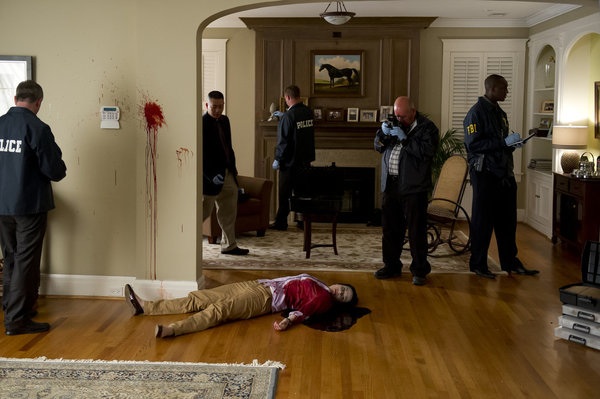 Will Graham (Hugh Dancy) has an interesting way of viewing a crime scene. He literally pictures himself as the killer, the bad guy who pulls the trigger or inflicts the fatal wound. It’s incredibly creepy, but it’s what makes him better than the rest of the criminal profilers at solving the crime. It also leaves room for some pretty crafty and interesting filming techniques, which make it really fun to watch.

Jack Crawford (Laurence Fishburne), an agent with the FBI, knows just how unique Graham’s skill is, so he enlists his help to solve a series of brutal murders. There is one major hesitation on Graham’s part, however. Right now he just teaches at the FBI Academy — he’s really not interested in a job that’s going to force him to be “sociable.” Interacting with the living is definitely not his greatest skill.

Graham does agree to help hunt the mysterious killer when he realizes this guy is pretty unique too. He’s a “sensitive psychopath,” in love with his victims and doesn’t want them to suffer. He has an interesting way of showing it, but who are we to judge expressions of love? Graham’s revelations get even more twisted when he realizes this compassionate butcher is eating his victims.

Enter Dr. Hannibal Lecter (Mads Mikkelsen). Since Graham is a bit of an awkward, brilliant nut job, the esteemed psychiatrist Dr. Lecter is also invited to work on the case as Graham’s partner. This is bad news because Hannibal is the cannibal serial killer the FBI should be looking for, but Graham has no idea. It’s especially disturbing because we don’t know if that was sausage Hannibal fed to Graham, or was it the lungs of his latest kill?

Check out the creepy Hannibal trailer >>

Lecter is clearly not the sensitive murderer Graham is looking for (it’s a little crazy that there are two cannibal serial killers at once. I didn’t realize it was such a popular pastime); however, he does watch out for his own. He makes a phone call to tip off the killer, Garret Jacob Hobbs.

Instead of fleeing for his life, Hobbs slits his wife and daughter’s throats. Apparently this guy was having a hard time letting go of his “little girl” who was about to venture out into the adult world and that emotional turmoil sent him on a killing spree. Graham was able to save the daughter after unloading his gun in Hobb’s chest. He may be a hero, but killing someone isn’t the safest move considering his delicate psyche.

As if having a cannibal for a partner wasn’t enough, now he has to deal with his… emotions. Oh the horror! The series is already getting juicy and this was only the first course.