Carrie Underwood talks to People about her life with her hockey player husband, Mike Fisher; how she stays in shape; and her favorite fast-food restaurant. 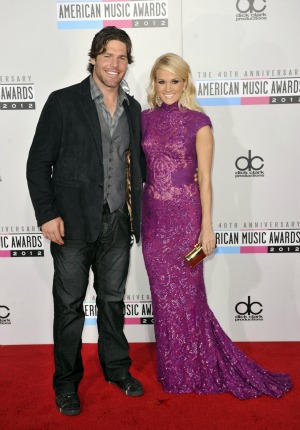 Carrie Underwood seems to have it all — a successful career, gorgeous husband and positive outlook on life. The Season 4 American Idol winner gives People the inside scoop on her marriage and how she makes it work with NHL player Mike Fisher.

Underwood has been on the road the last eight months doing her popular Blown Away tour, while Fisher has been in the midst of his hockey season for the Nashville Predators. She admits the long-distance relationship is difficult, but they do their best to keep the marital spark lit.

According to People, some of their favorite ways to stay connected include “frequent texts, hosting wine-and-grill nights at home with friends and meeting up for casual dates — at Subway.”

The Grammy winner says of the fast-food joint, “We called it ‘our place’ when we were first dating!”

Since she’s married to an athlete, staying in shape is also a priority for Underwood, even when she’s traveling.

The “Jesus, Take The Wheel” singer shared, “Even when he’s like, ‘I’m so out of shape,’ he still has a six-pack. Having Mike there — I want to be a hot wife!”

Not only is Underwood a hot wife, she’s also a dedicated wife. She understands the work it takes to keep a marriage on track, especially between two people with big careers.

The 30-year-old revealed: “If Mike ever told me he needed me to quit, I’d quit. When you make that promise to somebody, and you stand before God and your family and friends, you’ve got to do everything that you possibly can to make that work.”

The couple married in 2010 in Greensboro, Georgia, in front of 250 guests, including celebrity friends like Faith Hill, Tim McGraw, and Simon Cowell. This July, they will celebrate their third wedding anniversary.

Maybe an anniversary date at Subway is in order for this hot celebrity couple!