This is the End shows us what happens when our favorite comedic actors get together. Who knew the end of the world could be so funny! 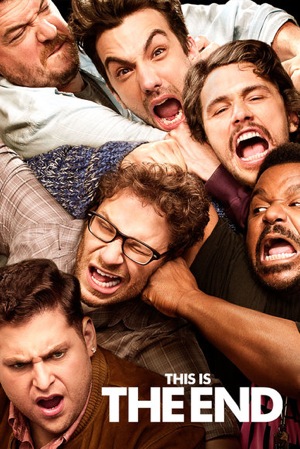 Our favorite celebs battle it out in the boardroom on Celebrity Apprentice, but what would happen if there was a celebrity apocalypse? This is the End is a hilarious portrayal of our favorite celebrities’ impending doom during the end of the world. While attending a party at James Franco‘s house, the world outside begins to crumble in a series of catastrophic events, trapping celebrity partiers Seth Rogen, Jay Baruchel, Jonah Hill, Danny McBride, Craig Robinson and many others in a house together. Sounds like fun! Being doomed with James Franco by your side is not so bad.

Exploring the fun and crazy situations they face during the end of the world, fans can expect the unexpected. Imagine working with a group of comedic actors on a film with no boundaries. While most of the movie is scripted, Danny McBride says, “We improvised all the time, but Seth and Evan wrote it, yet they would really encourage us to stay off the page. That’s where you get a lot of the best stuff, too. You’re reacting naturally to something funny or something mean. There’s a lot of improv.”

In addition to the organic funny moments, the cast opened up about what really tickled them during filming. Director and writer Evan Goldberg says, “I just remember making Jonah Hill laugh so hard he had to take a three-minute break. That was my proudest moment.” Seth adds, “He literally couldn’t do it because Evan pitched him a line and we had to stop shooting for five minutes until he gathered himself. That was the hardest I’ve ever seen anyone laugh.”

Craig Robinson tells us to be on the lookout for one of his favorite moments in the movie: “I’m going to call it the water scene, when McBride goes to drink the water. I would look out for that on the bloopers, because we could not get through this take. There was one person laughing, then another one.” McBride agrees that the funniest moments are “basically any scene I’m in the movie is one of my favorite scenes,” but that “everything in this movie is funny.”

Let’s just hope that no one pees their pants watching these hilarious scenes. In the trailer, due to dwindling supplies, Craig Robinson admits to drinking his own pee. However, would these funny guys really go to such extreme measures during the end of the world? “To drink your pee, or not to drink your pee?” Craig tells SheKnows that he has never done so, but that he’s “a never say never kinda dude.” Rogen consented that he would also drink his pee: “Who wouldn’t. Between dying and pee drinking, you’d drink your pee.”

Have no fear of this apocalyptic comedic collaboration. This is the End is coming to a theater near you June 18.

Warning: For mature audiences only