The famous actress and her famous husband are regularly the victims of celebrity gossip, but does she take any of it seriously? 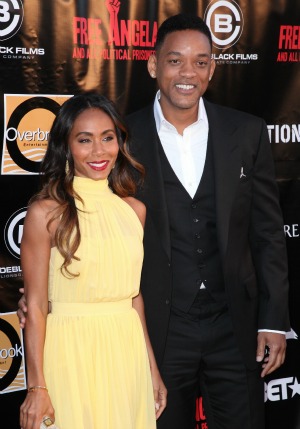 Jada Pinkett Smith has heard rumors for years about her marriage to her husband of 16 years, Will Smith, being an “open relationship.” The actress was recently asked by Marc Lamont Hill on HuffPost Live if the rumors are true, but her answers weren’t exactly straightforward. She did say she doesn’t let gossip bother her.

“I think people get that idea because Will and I are very relaxed with one another and I think because, from how I’ve answered questions,” Pinkett Smith answered, according to Christie D’Zurilla with the Los Angeles Times.

That answer doesn’t actually deny the rumors in any way, and she continued in a way that would make anyone wonder what their rules really are.

“I’ve always told Will, ‘You can do whatever you want as long as you can look at yourself in the mirror and be OK,'” she said. “Because at the end of the day Will is his own man. I’m here as his partner, but he is his own man. He has to decide who he wants to be, and that’s not for me to do for him. Or vice versa.”

Pinkett Smith has also dealt with rumors, most recently in the summer of 2011, that the couple was breaking up. But she told Lamont Hill that it’s important going into any marriage knowing it’s a “life partnership.”

The actress and sometimes-musician continued by saying that “life partnership” means they can, and will, weather anything together.

“He’s been by my side through some of the most difficult parts of my life,” she said, according to D’Zurilla. “And so that’s something you can never take away. A lot of other things, you never know, other things might change… but one thing is for sure: I love him deeply and he is my best friend. So then you always have that as your foundation and there’s nothing that can change that. Nothing.”

Pinkett Smith never really answered the question, but she is obviously past caring what anyone thinks about her marriage. Apparently, both she and Smith are secure in their relationship, and nothing can hurt that.

The Smiths go to Washington to fight human trafficking >>

The actress is currently promoting Free Angela and All Political Prisoners, a documentary she made with her husband, which opens April 5. Will Smith will next star in After Earth with the couple’s son, Jaden Smith.