Elisabeth Moss’ GQ interview was no fluff-filled piece! Find out which Mad Men characters the actress chose for a taboo game when forced to name names, as well as what she really thinks of stripping down for nude scenes. 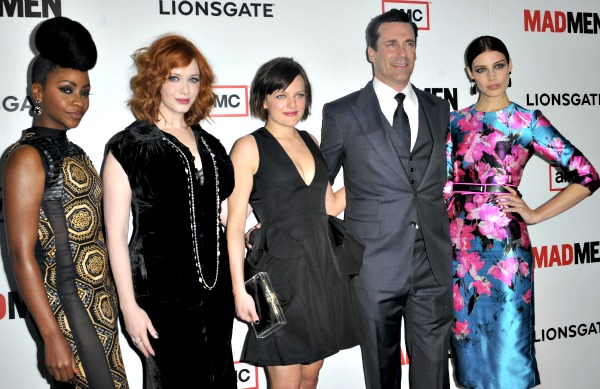 Elisabeth Moss quite reluctantly chose Roger Sterling, Pete Campbell and Don Draper — but not necessarily in that order — when GQ pushed its latest cover girl into a game known as “F***, Marry or Kill,” involving her on-screen Mad Men coworkers.

“Oh brother,” said Elisabeth Moss, who plays copywriter Peggy Olson on the AMC hit, before sorting her picks into proper order. “I don’t want to marry any of them! Impossible!”

Getting into the spirit of things, the 32-year-old offered, “I guess I’d marry… Sterling? F*** Don. And I guess I have to kill Pete? But let me say for the record that none of these are things I’d ever want to do.”

We’re sure there are some out there who are interested in a least two out of those three options, though! With the Mad Men Season 6 two-hour premiere set for April 7, fans are looking forward to once again keeping tabs on the office’s latest hookups — specifically, with Jon Hamm’s untamable character character, Don Draper.

When asked about filming nude scenes, 30-year-old actress Elisabeth Moss insisted, “Doing on-screen nudity is embarrassing and scary — and just embarrassing! You have to show things to people that you don’t want to show.”

What would Peggy Olson say if she were on set for Moss’ GQ shoot? As seen in the video below, the lingerie-clad star explained with a laugh, “She would be running [the shoot] and would be asking me, the actress, to take more of her clothes off to sell more magazines.”

Check out more from a behind-the-scenes look at Elisabeth Moss’ GQ photo shoot:

How would you answer the same Mad Men question Elisabeth Moss was asked?