The cast of This is the End reveals who they’d really want to be with in the apocalypse and how the idea originated. 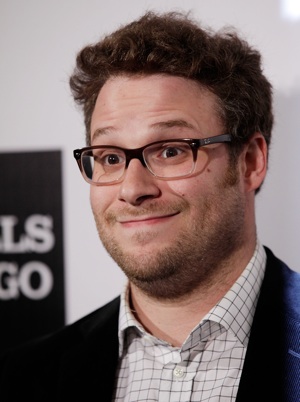 Comedy’s superheroes Seth Rogen, Craig Robinson and Danny McBride, and writer and director Evan Goldberg recently attended the comic book convention Wondercon where they promoted their upcoming movie This is the End. A story about a house filled with celebrities during the apocalypse, the cast admitted to SheKnows who they would really like to spend it with.

Danny McBride was sentimental in claiming he’d stick with the cast of the movie: “This is a good crew to hang out with in the apocalypse,” while Craig Robinson impartially said, “I’m very big on living in the moment.” However, Rogen and Goldberg revealed they would spend their last days with David Beckham. At first Seth admitted it would be his wife in case she read this article, but then changed his answer, siding with Evan’s suggestion. “OK, fine. David Beckham, then my wife.”

Who knew these friendly fellas had a bromance for Beckham? Could the feeling be mutual? Maybe David should invite Seth to dinner? They could talk about making a sequel starring Beckham as the soccer star hero who bunks it up with a group of funny celebrities to survive the death of Hollywood.

So how did they come up with the idea of turning the apocalypse into a funny movie? Seth says the idea for This is the End began from a short film he and his buddy Jason Stone of USC made years ago. They played two friends stuck in a house during the apocalypse. From there they evolved the same idea to include a bunch of people who played themselves.

Danny McBride says that it is the perfect genre for Wondercon fans because “I think the apocalypse you don’t really see in a comedic way. I think it’s something that’s fresh for these guys.” After all, he says, “Everyone knows that the apocalypse is very wonderful.” Who knew the end of the world could be so funny!

Who would you spend the apocalypse with? Would it be with someone you know, or perhaps your favorite celebrity?

This is the End will be in theaters June 12.