The incredibly tacky fellow beachgoers who witnessed Heidi Klum rushing to the aid of her 7-year-old son and nannies in Oahu just shot pictures instead of doing anything to help. 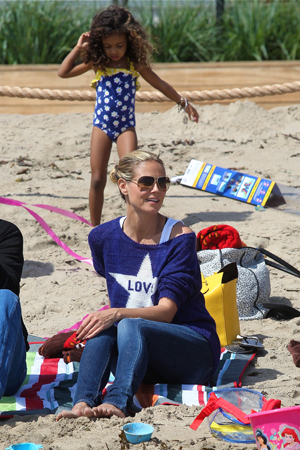 The New York Daily News published dramatic photos taken today of heroic Heidi Klum in the midst of saving son Henry and family nannies. The photos are great — but they were taken by witnesses who stood and snapped pictures instead of doing anything to aid the struggling supermodel.

“The family was surprised that we were being photographed and no one would come help us,” she told People.

Now why would you want to actually help another human being who’s trying to save people from drowning when you can take pictures on your cell phone and sell them to illustrate stories about Heidi Klum’s beach body?

The model and reality show star told People that she “did what any mother would do” and waded in to help when her son and family nannies were caught in a sudden and dangerous riptide.

The photos show her in the water grasping her son’s wrist, then straining to pull one of the nannies out of the water.

Meanwhile, bodyguard Martin Kirsten was photographed on all fours, trying to get his breath back after the incident.

The charming photographer even sold a photo of Klum’s right nipple peeking out of her bikini top as she runs back up the beach, her face strained.

Klum was downplaying the incident Monday when she returned back home to Los Angeles.

“These photos taken recently look much worse than it really was,” she told People.