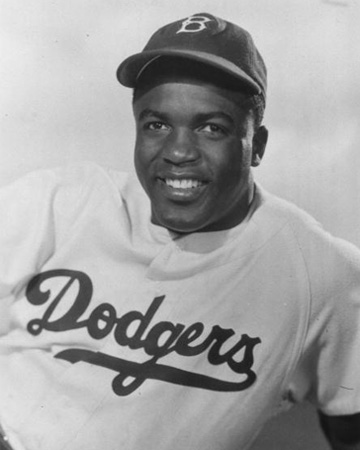 Jackie wasn’t always such a straight arrow — he joined a neighborhood gang when his family moved to Pasadena, California, and began acting out. Ultimately, his mentors helped him see the error of his ways.

Go Bruins! UCLA counts Jackie as an alumnus… almost. Financial hardship forced him to drop out shortly before graduation.

Coming from a family of sharecroppers, Jackie was hard-wired for hard work.

Got mail? Jackie was the first Major League Baseball player to grace a U.S. postage stamp.

Jackie met his wife, Rachel Isum, while at UCLA.

Jackie’s number — #42, of course! — was the first one retired for every team by Major League Baseball. The honor occurred 50 years after he became the first African-American major leaguer.

When Jackie won MLB Most Valuable Player in 1949, it was no joke. That year, he led the National League in both batting average and stolen bases, helped the Dodgers win the pennant and was tapped for his first All-Star game.

Jackie owes much of his success to his mom, Mallie, who raised Jackie and his four other siblings singlehandedly.

His athletic prowess wasn’t limited to baseball — he was the first four-sport varsity letter winner in UCLA’s history. His sports? Football, track, basketball and, naturally, baseball.

In 1955, Jackie contributed to the Dodgers winning the World Series.

Batter up! The infielder retired with a career batting average of .311.

Before making it to the big leagues, Jackie played semi-professional ball in Honolulu, Hawaii, for the Honolulu Bears.

It was during his stint in the Army that Jackie was arrested and, subsequently, court-martialed for taking a stand against segregation on a bus during training.

His first team in the “Negro League” was the Kansas City Monarchs.

Branch Rickey — played by Harrison Ford in the move 42 — hand-picked Jackie from the Negro Leagues to play for the Brooklyn Dodgers, thereby beginning to integrate the Major Leagues.

Here’s to you, Mr. Robinson! April 15, the date Jackie played his inaugural game for the Dodgers, has since been declared Jackie Robinson Day.

It was the first time an African-American had ever played in the major leagues.

By the close of Jackie’s first season, he’d already racked up the title of National League Rookie of the Year.

Who’s laughing now? When Jackie first began playing, he suffered harassment from spectators and even his teammates.

Not to mention the competition! Ben Chapman, manager of the Philadelphia Phillies, joined his team’s players in yelling derogatory terms at Jackie.

Hey, not all managers gave the sport a bad name! Dodgers’ manager Leo Durocher remained steadfastly loyal to Jackie throughout his career.

In a gesture of kindness now famed in baseball’s storied past, Dodgers shortstop Pee Wee Reese put his arm around Jackie in a show of solidarity when fans were harassing #42.

Jackie was the precursor for today’s big-ticket baseballers: During his heyday, he became the Dodgers’ highest-paid athlete in the franchise’s history.

A civil rights activist, Jackie filled his time with much more than baseball. He spoke out openly against discrimination— including calling out the Yankees for being all-white years after he broke the color barrier.

No ifs, and, or nuts about it: The American hero most definitely went to work as an executive for Chock Full O’ Nuts coffee company after retiring from baseball.

In 1962, Jackie enjoyed another first — becoming the first African-American inducted into the Baseball Hall of Fame.

Jackie’s legacy lives on through the Jackie Robinson Foundation started by his wife, Rachel, to help provide scholarships and mentoring to youths in need.

Sibling rivalry, anyone? Jackie wasn’t the only athlete in his family — brother Matthew won silver in the 200-meter dash at the 1936 Olympic Games in Berlin.

An inspiration to this day, Jackie believed in making his life count. He is famously quoted as saying, “A life is not important except in the impact it has on other lives.”