Yesterday’s announcement that Jimmy Fallon is taking over the hosting helm on venerable The Tonight Show has all the hosts weighing in on the decision. 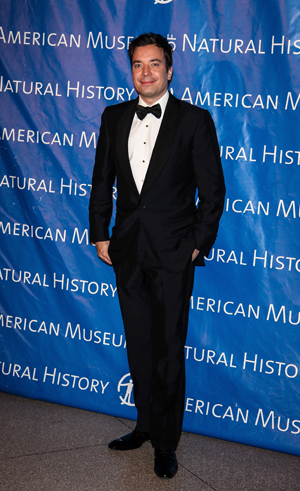 Jimmy Fallon has a brand-new job: Host of The Tonight Show, taking over for Jay Leno. And all the hosts have something to say about it.

“Congratulations Jimmy,” Leno said in a statement. “I hope you’re as lucky as me and hold on to the job until you’re the old guy. If you need me, I’ll be at the garage.”

Leno also talked to the New York Times, contrasting this changeover to the infamous 2009 ouster thanks to Conan O’Brien.

If Jimmy Fallon’s out, will Seth Meyers tackle Late Night? >>

“The main difference between this and the other time is I’m part of the process. The last time the decision was made without me. I came into work one day and — you’re out,” Leno told the Times. “This time there really aren’t any complications like there were the last time. This time it feels right.”

Speaking of Conan O’Brien, who has been conspicuously silent on the matter of The Tonight Show on his own TBS talk show, Wednesday night he spoke up, saying that Fallon is “the perfect guy” to replace Leno.

“I want to congratulate Jimmy, that is a really fun gig,” O’Brien said as the audience laughed knowingly. “It is!”

“It’s a fun gig and you know what? Jimmy is the perfect guy to do it; he’s going to do a fantastic job,” O’Brien continued sincerely. “So congratulations, Jimmy.”

“This happened once before with Conan O’Brien, and then they had to bring Jay back, and so he had to start his show all over again, and now it looks like the same thing is happening. And I just — I don’t get this,” Entertainment Weekly quotes the host as saying during his Wednesday night monologue. “Didn’t we just go through this?”

Letterman had words for NBC as well: “What’s the matter with these guys? You know, honestly, what are they thinking?”

Fallon himself released a statement claiming, “I’m really excited to host a show that starts today instead of tomorrow.” And in his monologue on his own Late Night, he affirmed for the crowd that he was excited to take over The Tonight Show next February, but “Until February, our focus is right here on whatever this show is called.”