The Flaming Lips and Ke$ha worked together on a 2012 song. But the band likes the singer so much, they have reportedly decided to do an entire album with her. 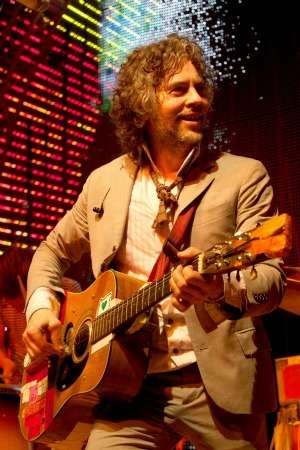 After working together on a song for the Flaming Lips’ 2012 album, the band and singer Ke$ha have decided to release a full-length album together. Flaming Lips lead singer Wayne Coyne answered fan questions on Reddit on Wednesday, and was asked what he thought of working with the singer.

“She is a blast on all levels,” Coyne answered. “She’s funny, she’s humble. She’s bada**. She’s everything. She’s awesome. We’re actually already working on an album with her. It’s called Lip$ha.”

The musicians first collaborated together on the band’s 2012 album The Flaming Lips and Heady Fwends. Ke$ha’s track on the album was “2012 (You Must Be Upgraded),” but each song on the album included a collaboration of some sort.

Steve Jobs getting a musical tribute from the Flaming Lips >>

The band is also releasing a new album The Terror on April 16, but it’s not the upbeat record some of their past records were. One fan on Reddit asked why they would put the “pretty bleak and hopeless album” out in the spring.

“I think it’s also a record about acceptance,” Coyne answered. “When the world expects you to be all sunshine, you want to express feelings that are the opposite so that others can share what you’re feeling. You want what you’re going through to be expressed and shared. It’s even more useful when you’re not just happy that the sun’s coming out. You can be happy in the beginning of the day, sad in the middle, and happy in the end of the day.”

The Grammy-winning band has been around for three decades (starting four years before Ke$ha was even born) and keeps going strong to this day. For Coyne, their legacy is something to think about, and a fan asked him what they want to be remembered for in the end.

“I think like all artists and musicians,” he said, “we want to know that we disturbed the comfortable and comforted the disturbed.”