Magic Johnson talks about his son EJ coming out of the closet and says it was no surprise to the family — after all, they’ve known before he hit puberty! 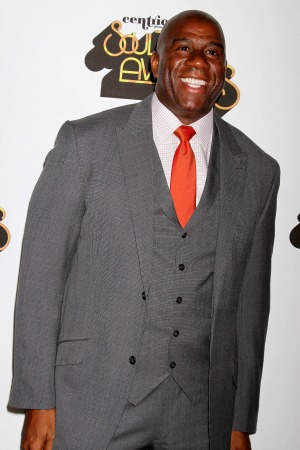 The son of AIDS activist and basketball legend Magic Johnson leaped out of the closet last week when he gave an impromptu interview with TMZ while holding hands with his boyfriend. Now Dad say it wasn’t news to him — E.J.’s sexuality has been an open topic of conversation since he was just 12 years old!

“We’ve known for a long time that my son EJ was gay,” Johnson explained to TMZ. “We finally had to sit down and talk about it. I told him, ‘Look, I’m gonna love you regardless, just let me know. Are you, or aren’t you?’ And finally he said, ‘Yes, I am.'”

“He was so young… I told him, ‘We are here to support you. We are gonna love no matter who you are, what you do. We just want you to love yourself and also make sure that you have all the information,'” said the sports star, who has worked with the LGBT community to educate on safe sex practices since his own HIV diagnosis in 1992. “I wanted to provide him with advice and guidance.”

And it turns out that E.J.’s biggest fear was the same as many gay men: That his dad would stop loving him. “He really wanted to make sure I was okay. He wasn’t worried about his mom, he was worried about me,” he said. “I love EJ so much. That’s my main man. I told him, ‘Nothing has changed.'”

“This was a moment for us as a family and an even greater moment for him,” he said of E.J.’s TMZ clip. “I think now he’s just the bubbly kid we knew again. He’s just happy that it is out. I’m behind him a million percent. This is really wonderful for him.”

But sadly, while E.J.’s experience has been positive, many young gay men in the black community face being ostracized or worse if they come out.

“It bothers me that they’re discriminating against anybody who’s gay,” Johnson said. “I’ve been in the gay movement for a long time because of HIV and AIDS. I see young men who are black who couldn’t come out, who couldn’t tell their parents, their neighbors. So now, it’s my son.”

“This is the year 2013 — we should stop discriminating against people,” Johnson argued. “And that’s what I’m gonna do with my son. But I’ll also support others. This is gonna be good for a lot of black young people.”