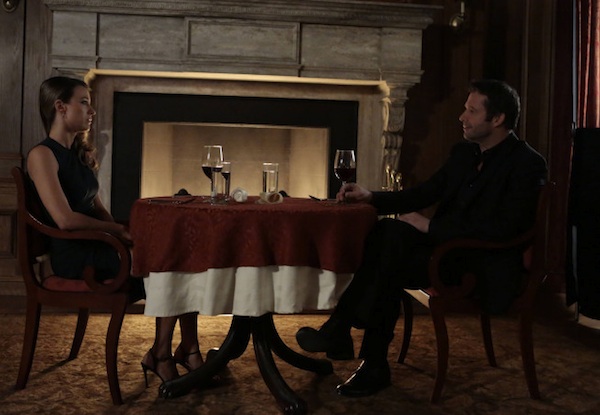 This week’s episode of The Following has Carroll (James Purefoy) and his cult playing defense. Finally, the FBI has some leads that might actually pan out.

Hardy (Kevin Bacon) and Weston (Shawn Ashmore) team up to bring down one of Carroll’s followers. During the interrogation, the follower lets it slip that there’s a cult house. Looks like Hardy is hot on the trail to finding Carroll and the rest of the following. Carroll tells Roderick nervously that Hardy knows too much.

Fox renews The Following for a 2nd season >>

Claire will make her first (and hopefully last) escape attempt with Joey. From the clip, we see the two of them running through the forest. We’re trying not to get our hopes up that she’ll be gone from that crazy house so soon, but the odds look promising, according to the preview. We know Carroll won’t hurt Joey, but it isn’t clear how far Claire can push him before he’ll snap. We hope this doesn’t turn into one of those, “If I can’t love you no one will,” situations.

It looks like Claire (Natalie Zea) will also have her moment with Emma. Carroll isn’t the only one in the family with a killer instinct. Not that we blame Claire for threatening Emma. If you take a woman’s child, you pay the price. Claire has every right to defend her son, and Emma’s the one who put him in harms way to begin with.

Just when we think the FBI might have won, Carroll is back in play by kidnapping Weston. Didn’t the poor guy just return to the show after recovering from a near-death stab wound?

The show doesn’t leave us or the characters with anytime to catch our breath. No telling who will even survive to the finale let alone win in the battle again Joe Carroll and his cult.