Battling it out for “Vocal Event of the Year” at the 2013 ACM Awards, Rascal Flatts and Natasha Bedingfield make it look so easy. 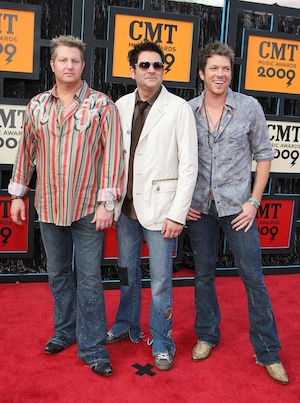 What Gavin DeGraw and Colbie Caillat‘s collaboration was to Safe Haven is what Rascal Flatts and Natasha Bedingfield’s “Easy” is to the 2013 ACM Awards — entirely praiseworthy.

Who is co-hosting the ACM Awards? >>

I may even be inclined to dub it epic should I confine my description to one word. Their tragic love song, “Easy”, is about putting on a brave face in the aftermath of a breakup. It’s got meat and potatoes — heavy on the lyrical and vocal quality. This collaboration is hard to rival.

Rascal Flatts has a masterful way of verbalizing delicate moments, secrets embedded in our hearts and gut-wrenching thoughts that run rampant in our minds.

Natasha Bedingfield has an off-beat personality and a peculiarly powerful (yet veering towards wailing) voice, singing songs that typically beam with positivity. Both were strong artists in their own right, but I had pegged them as niche artists.

Which country singers do you think have names that are made up? >>

Heck, I figured Rascal Flatts is country and she’s from another country (yes, I’m ignorant). Is this going to be some upbeat Brit country pop? How was this going to work? These questions riddled me when the song started, but when Natasha chimed in, all doubt subsided.

Natasha Bedingfield told Billboard back in 2011 that at first she was anxious about their different recording and singing styles. But once you hear this track, if you haven’t already, you will quickly notice the distinct styles match up unexpectedly. This isn’t Natasha pretending to be country, or Rascal Flatts trying to be pop — it’s two worlds hugging and watching musical sparks fly.

Want to see a video round-up of all the ACM Award nominees? >>

Alas, even though this is a post-breakup song, the musical chemistry between the two forces is so compelling that you may momentarily forget what it’s about. It’s relatable since I think everyone has put on their best poker face at some point to hide emotions and the artists really captured all the emotions involved.

The track was produced by Dann Huff, Brian Kennedy and the boys of Rascal Flatts.

Congratulations to these nominees, because in my books, you’ve already won me over.

Want some more music for your playlist? Check out our other music reviews: