The actor will be playing a similar role to one he has already played, but you’d think the producers would have known that when they cast him. 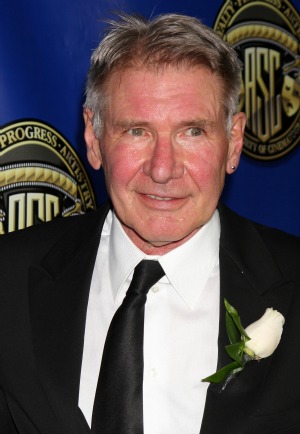 Harrison Ford’s addition to the Anchorman 2 cast was a big deal when it was announced back in March, but fans may not be able to count on him actually being in the film. The actor sat down with Entertainment Tonight and said it’s possible that a producer’s mistake may leave him on the cutting room floor.

Ford plays the “curmudgeonly newscaster” in the sequel, Anchorman: The Legend Continues. But his character is similar to the one he played in the 2010 film Morning Glory. Ford said the producers weren’t aware of that role when they hired him for the new movie.

“I hope it’s a little different. One hates to repeat themselves,” he said, according to the Huffington Post. “They asked me to do it before they knew I had done Morning Glory.”

Ford ended up shooting his part in the film, but joked that “it would be easy enough to cut out.”

The legendary actor did seem like he was joking, so he will most likely be in the new film (we can hope!). The sequel to 2004’s Anchorman: The Legend of Ron Burgundy is full of huge stars, but Ford didn’t seem too impressed.

“They weren’t all in the scenes that I did. It was just what’s-his-name and the applesauce girl,” he said, presumably speaking of stars Will Ferrell and Christina Applegate.

Those big stars include not only Ford, Ferrell and Applegate, but also Steve Carell, Kristen Wiig, Paul Rudd, James Marsden and Greg Kinnear, among others.

Carell is especially happy with how the new film turned out because of the bad reputation some sequels seem to have.

“It is a perfect sequel to the first one. I’m really excited about it,” Carell recently said, according to the Huffington Post.

The comedian added that the new film is meant to take place seven years after the first Anchorman.

Anchorman: The Legend Continues is set to be released in theaters on Dec. 20, 2013.