On the upcoming episode of Vikings, Ragnar challenges the Earl and they go head-to-head. We’ve got an exclusive preview of the proposition and it’s Floki we’re rooting for! 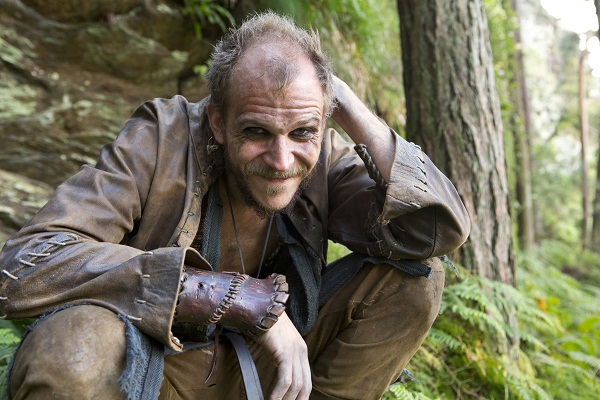 A brand new episode of History’s Vikings airs this Sunday and SheKnows was lucky enough to score an exclusive clip.

During the most recent episode, the dirty hot Viking Ragnar (Travis Fimmel) and his band of rebels took off in his boat (built by Floki) to unleash a new kind of hell on one English town. They returned home a man short. During the raid, Knut stumbled upon a cowering woman and child and proceeded to have his way with her. Ragnar’s beautiful beast of a wife, Lagertha found him and jumped to the mother’s rescue. In a rage, Knut tried to rape Lagertha, but she took his own dagger and stabbed him to death. (We love Lagertha!) Upon returning home and earning Earl Haraldson’s questioning, Ragnar took responsibility for Knut’s death, telling him he only killed him to protect his wife. The Earl suspects foul play, though, and has Ragnar arrested. We left Ragnar on a hill in quiet contemplation, deciding what to do next.

Vikings is dirty, hot and boyfriend-approved >>

During the next episode, Ragnar finds his answer when he finds out Haraldson is torturing Ragnar’s (kind of skeezy) brother, Rollo. He sends his buddy Floki to deliver a challenge to the Earl.


Meet Floki (Gustaf Skarsgård): The quirky friend of Ragnar and the man in charge of issuing that challenge. Floki, named for the trickster Norse God has all the grit of a Viking accounted for, but the gruffness and bulk are missing. He’s got a mischievous grin and the jester’s ability to steal every scene he’s in. Most importantly (for Ragnar, anyway), Floki is a master shipbuilder. It’s his new design that allows Ragnar’s ship to not only sail the wide ocean, but also cruise up shallow rivers. Floki is a genius, and like most geniuses, he comes off mildly odd and highly under-appreciated. That’s exactly why we love him.

Can you spot the familiar face amongst the Vikings? >>

As for Vikings and Gustaf, we love them, too. Until the last several years, most of the Swedish-born actor’s work stayed a globe away. His pure talent (and perhaps the Skarsgård name… and looks) has slowly but surely found him in front of American audiences and we’re certainly glad for that. Vikings, meanwhile, has also found a loving American audience. Its history and folklore-based story and Game of Thrones-esque settings have helped reel in a whopping average of 5 million views per episode.

We’re hoping Gustaf, Floki and Vikings are around for the long haul. Tune in to the next episode, “Burial of the Dead” on April 7 at 10/9c on History.