Kendra Wilkinson let her fear of heights win as she balks on her final dive on ABC’s reality show, Splash. She quit the show on Tuesday night. 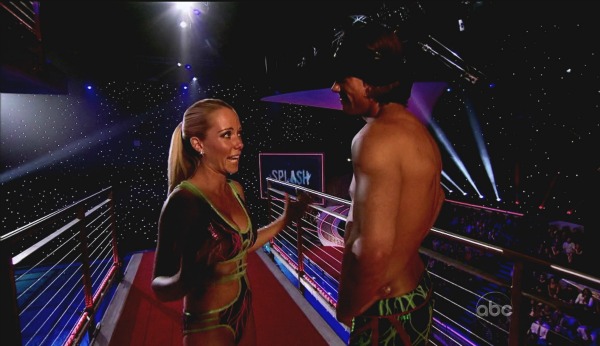 When Kendra Wilkinson was starring on The Girls Next Door with Bridget Marquardt and Holly Madison, she was always the fun, fearless one in the group. She was the one who always made Hugh Hefner laugh with her spunk and spontaneity.

The athletic gal has also been a huge sports fan, so it was no surprise when she married former NFL player Hank Baskett back in 2009. But her recent foray on ABC’s reality diving show, Splash, has a few fans scratching their heads. Where did that brave and fearless woman go?

Last night, as Wilkinson was about to take her team dive with her partner, extreme skier Rory Bushfield, she gave up. The former Playboy Playmate had been vocal about her fear of heights throughout the series, but she always managed to get the job done. This time, her fear won.

After climbing all the way up to the 23-foot platform, she struggled to get close to the edge of the diving surface. With tears in her eyes, she quit.

Wilkinson said, “I’m so sorry, everybody. It’s bittersweet. One thing I don’t do is quit. This is the first time in my life I’ve quit something. This will haunt me for the rest of my life.”

Not only was Wilkinson upset with herself, she found out the fans were pretty angry, too. She received a flood of tweets that criticized her for leaving the show since the rules of Splash state that if the contestant does not dive, they will automatically leave the show.

The mother-of-one took to Twitter to respond the haters. She wrote, “Damn I got a lot of hate tonight but ill take it. Big mistake signing up for the show. Sorry I let you all down.”

Her fellow contestants were probably okay with her dismissal since it guarantees them a spot in next week’s show.

For Wilkinson fans, they can next catch her on the big screen when Scary Move 5 hits theatres on April 12.