Two months and counting until True Blood is back and badder than ever! 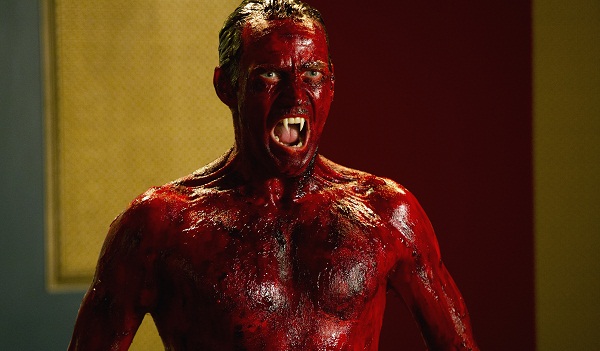 And then, he (kind of) killed himself. He drank the Lilith blood and melted into some kind of puddle of bloody goop. However, he suddenly re-formed into a bloody mess of a, well, Bill/Lilith-crossover. So… what’s next? What’s in store for Season 6? Based on HBO’s first promo, it looks like it picks up right where it left off.

That’s a whole lot of naked, bloody Bill and we approve. Now that he’s apparently some sort of vampiric god(dess), he’s destined prove himself as an absolutely treacherous foe. It doesn’t look like Bill (Stephen Moyer) will be the only obstacle this season, however. Last season we saw a major Pam/Tara breakthrough when they kissed. So, what’s happened now to make Tara fend off a nasty slap from Pam? We also see Eric Northman (zombpire, Alexander Skarsgard) dressed up as a detective (and, for once, not a very cute one) while his voice-over proclaims, “If the humans want war, we’ll give them war.” In other words, it looks like Season 6 might be a mess as well, but it’ll also be bloody good.

6 questions for Season 6 of True Blood:

The only way we’ll find out the answers is if we tune in for True Blood Season 6, which premiers on June 16 at 9/8c on HBO. Drink it all in.

What are you dying to see in True Blood Season 6? Readers: Please don’t ruin it.