Game shows are a reality-lineup staple, and here’s a new one to chew on: celebrities you love, playing games with drunken nobodies. 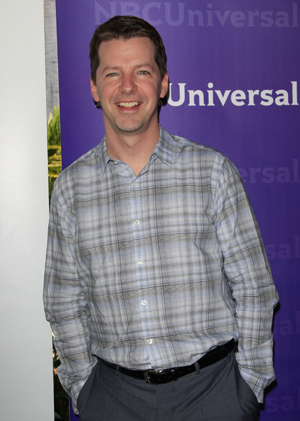 That Sean Hayes must have one heck of a Rolodex. Or whatever app he uses as a Rolodex, that is: He’s lined up an incredible bunch of celeb pals to host his new NBC game show, Hollywood Game Night.

Plus it’s hosted by Jane Lynch.

So everyone’s drinkin’! And playing… what? Go Fish? Pictionary? Charades? Oh, let it be charades. Would you not kill to watch a tipsy Amy Poehler trying to act out the title of Baby Mama?

Hayes is a bit of a powerhouse there at the Peacock, with his clever little producer paws in such projects as the fairytale drama Grimm. He’s also pulling double duty as an actor on NBC’s Smash.

Dang, Hayes, when do you sleep?

Lainey Gossip has just one question: “Does this mean that we’re one step closer to my dream of reviving Battle of the Network Stars?” she wonders. “It’s like the Emmys and the Olympics AT THE SAME TIME.”

Younger readers: It was a ’70s thing. And it was awesome.