Jimmy Fallon is celebrating his fabulous new gig today after NBC made a major announcement about The Tonight Show. 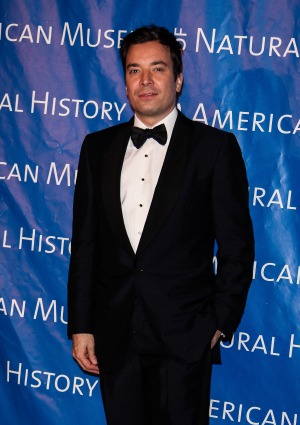 NBC has finally announced the worst-kept secret in TV of 2013: Jimmy Fallon will take over The Tonight Show when Jay Leno retires after 22 years.

While the move won’t happen until spring of 2014, NBC confirmed the move after months of rising chatter — and Fallon is psyched.

“I’m really excited to host a show that starts today instead of tomorrow,” he said in a media statement.

“Jay Leno is an entertainment icon, making millions of people laugh every weeknight for more than 20 years,” he said. “His long reign as the highest-rated late-night host is a testament to his work ethic and dedication to his viewers and to NBC.”

“We are purposefully making this change when Jay is #1, just as Jay replaced Johnny Carson when he was #1. Jimmy Fallon is a unique talent and this is his time. I’m thrilled he will become the sixth host of The Tonight Show at exactly the right moment, in conjunction with our coverage of next year’s Winter Olympic Games from Sochi, Russia.”

“I also want to congratulate and thank Debbie Vickers and her Tonight Show team for producing an entertaining, first-class show every night for the past two decades,” Burke finished. “Debbie’s role in the creative and popular success of this franchise cannot be overstated.”

Leno’s comments were a bit briefer. “Congratulations Jimmy,” he said. “I hope you’re as lucky as me and hold on to the job until you’re the old guy. If you need me, I’ll be at the garage.”

Jay Leno has hosted The Tonight Show since taking over for Johnny Carson in 1992. Fallon, a Saturday Night Live alum, has helmed Late Night with Jimmy Fallon since 2009, a gig that Seth Myers is rumored to be taking over.