Heather Morris plays a high schooler on Glee, but in real life, the actress/dancer is 26 and soon to be a mom. 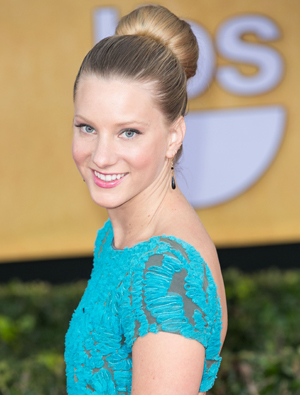 Brittany from Glee is a new mom-to-be, reports Us Weekly, and she couldn’t be happier.

The 26-year-old actress and dancer’s longtime boyfriend Taylor Hubbell, who Heather Morris has known since high school, is reportedly the father of her new oven-bun.

“She’s a little more than three months along and starting to show,” a source told Us Weekly.

The baby was a bit of a surprise — but a pleasant one.

“It was totally unexpected, but they are incredibly happy and excited,” the source added.

Morris, who used to be a backup dancer for Beyoncé, but got her breakout role on FOX’s smash show Glee, has talked before about wanting to have babies with Hubbell.

“I want to marry Taylor and have kids with him,” the star told Fitness magazine in 2011. “I love acting, but if it affects my relationship, then I won’t continue.”

Well! Does that mean Heather Morris will continue on Glee, or take the stay-at-home mom route? Only time will tell.

Since most of the show’s original cast members graduated last season, Morris has been a bit of an anachronism this season, anyway. She was supposed to graduate along with the others, but it was discovered that she had a 0.0 GPA. Yet she could still participate in the Cheerios? Oh, I’m looking for reality on Glee, somebody slap me.

Anyhoo, the Us Weekly source told the magazine that the couple was not planning to get married. But “I see it in their future,” said the source.