Wynonna Judd has something to celebrate today: Her husband is walking again after losing a leg in a horrific motorcycle crash. Plus: A Dancing with the Stars spoiler! 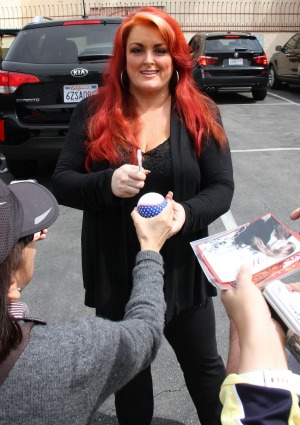 What could have been a terrible tragedy has turned into a story of hope for one Dancing with the Stars contestant. Wynonna Judd is celebrating today after watching her husband Michael Scott “Cactus” Moser walk again after losing his leg in a near-fatal motorcycle accident last summer.

“After eight months of waiting, he walked towards me for the first time two days ago,” Judd told People backstage on Monday. “It’s been an emotional ride for me this week.”

Little did she know the week would get heavier — but more on that in a second.

The country star said her husband’s prosthetic leg took some getting used to. “It freaked me out because I’ve seen him in a wheelchair and using a walker, and he just walked towards me and I was like, ‘Wow.’ I was so stunned. I saw the wreck, I saw him lose the leg.”

“He’s so positive,” she said. “I call him Mr. Happy-Go-Lucky. It’s really irritating, because sometimes I just want to complain or act tired about dancing, and he’ll say, ‘But you’re moving and you’re looking so great.’ I’m like, ‘Go talk to Tony. You guys are so alike.’ “

Tony, of course, is Tony Dovolani, Judd’s partner on DWTS (SPOILER ALERT!) — or at least he was until the pair was unceremoniously dropped last night. But the champion of last season said every minute was worth it, despite losing the chance at another mirrorball.

“We laughed the entire time, our families bonded and her husband is such an inspiration to me,” Dovolani said. “I took him golfing with one leg, we went horseback riding together and he received his new prosthetic leg. There were so many life triumphs that I was a part of. Dancing with the Stars brought this woman in my life and I’m forever grateful.”