So men of the ’60s and ’70s weren’t like Mike Brady and Ward Cleaver? Who knew office environments (OK, maybe just ad agency environments) were so rife with alcohol, cigarettes and sex? These are the cads of Mad Men… 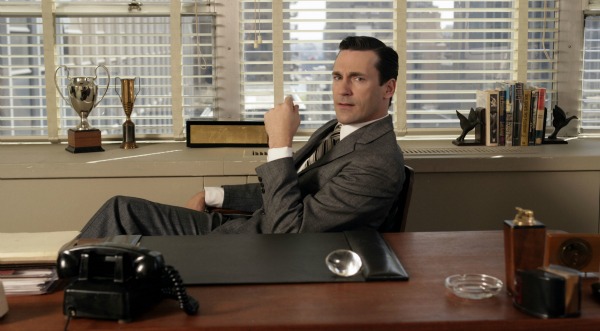 Men probably view Don Draper as some sort of iconic bad a** because he sleeps around, is sort of the HBIC (Head Bro In Charge), drinks like a fish and smokes like a stack — while at work. In other words, he lives a fairly unapologetic life. Women on the other hand are scared to death that their husbands are secretly like The Draper — playing father and husband at home and doing whatever the hell they want once their car leaves the garage. Admit it, ladies, since you started watching Mad Men, you’ve been wondering if your husband has a secret identity. 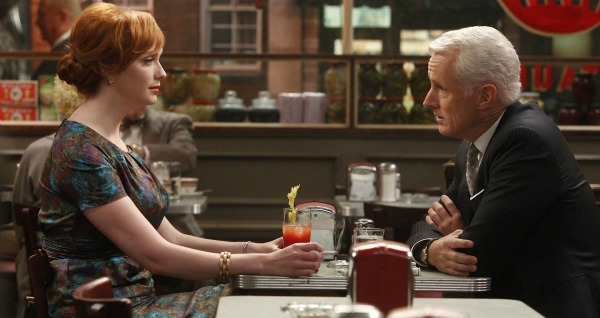 Here again, we’re sure every guy in their ’50s wishes they were aging like the still-sexy Roger Sterling. While his name sounds just a bit romance-novelish, Sterling is Don Draper’s boss, and about the only guy who can tell Draper what to do. When your name is on the building, which Sterling’s is, people listen — including women like the ultra-cool red-headed secretary manager, Joan Holloway. Sterling got greedy with wealth, position and power. There really is nothing more pathetic than a guy who pushes his luck, ends up in the hospital and cries like a 6-year-old boy telling his wife he loves her after having a heart attack on his office floor trying to get with someone his daughter’s age. Blek. 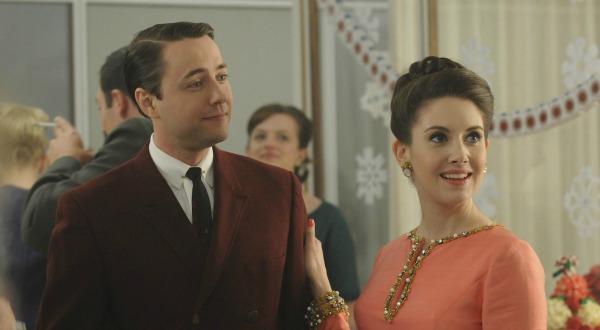 We’re not sure where the casting director for Mad Men found Vincent Kartheiser for the role of the overindulged, insecure, at-times-slimy Pete Campbell, but they achieved prep-school boy perfection. This is the guy we’ve all met — born with a silver spoon in his mouth, disliked immensely, and since he’s never really had to work for anything in his life, he resorts to devious means to get ahead. Pete knocked up his secretary the night before he got married (cute) and tried to blackmail Draper after lifting Draper’s personal mail. Pete is one of the few characters that solicits a bit of sympathy. He’s young and making an effort — all the others are older, jaded and should know better.

Jon Hamm forced to put his package away by AMC >> 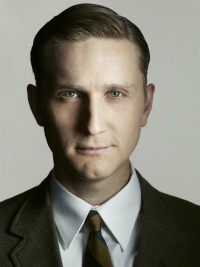 Aaron Staton as Ken Cosgrove
Pete Campbell’s arch nemesis Ken Cosgrove looks and acts like a guy you wouldn’t want to be left in a dark corner with. You know the guy, ladies. He looks suave and seems charming enough, but if you heard how he talks around the guys you know that he’s not the kind of person you or your drink should be left alone with at a party. His ability to write and get published is one of the many things that Pete loathes about him but women recognize him as the sort who would step over his own dead grandmother to get ahead. The fact that he’s married, especially when you consider the crowd he runs with, isn’t fooling anyone. 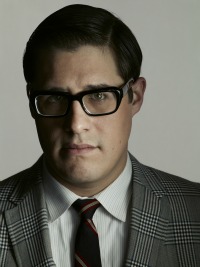 Richard Sommer as Harry Crane
Harry starts out harmless enough. He’s a bit nerdier than the rest of the members of the boys club and at first he’s a loyal husband. But you can only flirt with the dark side for so long before it takes hold of you. One night at a drunken office party, Harry ends up sleeping with one of the secretaries and gets kicked out of his house for a few months. When Harry’s wife takes him back in and they have a baby, you wonder if Harry might be the one good apple on the cart. Sadly, as his career advances, so does his taste for extra-marital affairs. Harry, Harry, Harry. 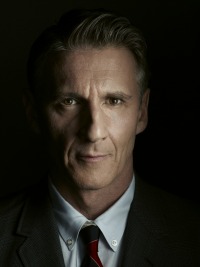 Christoper Stanley as Henry Francis
Why does the man who rescued Betty from an unhappy marriage with Don Draper make the “cad” list? Call it guilt by association. Henry’s mother accuses him of marrying Betty for sex, but if that’s the worst thing Henry does, he’s a saint compared to the rest of Mad Men‘s mad men. Henry is a dependable step-father and is patient with Betty through her cancer scare and her oft-explosive handling of her daughter, Sally. The rest of the boys on this list could take lessons in how not to be a cad from Henry.