Magic Johnson’s son, E.J., was caught by TMZ‘s cameras strolling hand-in-hand with his boyfriend on the Sunset Strip last week. Yep, he’s gay and he has nothing but love and support from his parents. 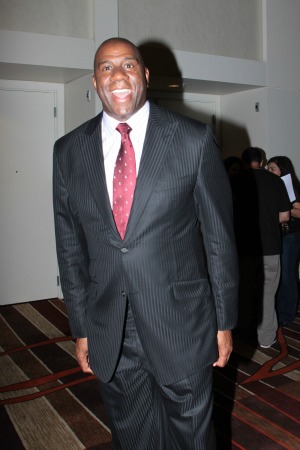 It’s always important for kids to feel supported and loved by their parents. That’s exactly what Magic Johnson‘s son, Earvin Johnson III, gets from his famous dad and his mom.

The 20-year-old was captured on video by TMZ last week holding hands with his boyfriend during a night out on the Sunset Strip in Hollywood. The videographer didn’t make mention of his significant other even though it was clear the two were together. Instead, they talked sports.

Earvin’s dad is one of the new owners of the Los Angeles Dodgers, so the two discussed the renovations of the clubhouse and opening day. Of course, his dad’s famed team, the Los Angeles Lakers, were also discussed even though the team has had a dismal season.

TMZ contacted the legendary basketball player, who said of his son, “Cookie and I love E.J. and support him in every way. We’re very proud of him.”

E.J. is currently a student at New York University.

It is no surprise that Magic supports his son unconditionally. The athlete was the victim of rumors following his 1991 announcement that he was HIV positive. At the time, many suspected he was gay or bisexual since HIV/AIDS was almost exclusively associated with the gay community at the time.

Johnson spoke with the Huffington Post Canada in December 2011 about the cultural effects 20 years later.

He said, “As a hip-hop fan, you realize that homophobia is still an issue everywhere, but especially in the black community. When people are scared to talk about it, that’s how the disease spreads. So what have you been doing to get that risk reduced?”

The good news is that the stigma of coming out is less of an issue with the younger generation. It also helps that many celebrities have been forthcoming with their sexual identity in the last few years like Frank Ocean and Anderson Cooper, and that many others in the public eye support gay marriage.

What is abundantly clear is that E.J. has the loving support of his parents.

45 mins ago
by Summer Cartwright