Maybe now that 30 Rock is over, Alec Baldwin feels he has nothing left to live for? He certainly seems to have a death wish as he cycles in NYC Monday. 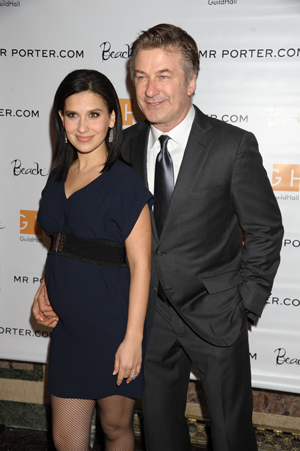 The star, whose 55th birthday is on Wednesday, may not make it to said birthday if he rides a bike as he did Monday. He was spotted cycling on Greenwich Avenue in the West Village with no helmet and against the flow of traffic.

The coup de grace? Baldwin was yakking away on a cell phone!

This breaks any number of laws. As of July 12, 2011 it is illegal in New York State for drivers to use any kind of handheld advice (like a phone, say) to talk, play games, send texts, etc. Bikes are expected to adhere to all the same laws as car drivers.

The Daily News noted that Baldwin had just come from working out at the Equinox gym on the Lower West Side.

Baldwin and his 28-year-old wife, Hilaria, are due to have a baby girl this summer. Said baby girl could use a daddy, Alec Baldwin. Be careful out there.

In other Baldwin news, ex-co-star Shia LaBeouf, who ignominiously departed from Baldwin’s Broadway play, Orphans, in February, said on Letterman last night that the reason for his abrupt exit was that he and Baldwin “had tension as men.”

Ha! Ha ha ha ha ha! What does that even mean? Tension as men, specifically? Your manliness was so fierce that it strained some extra-manly part of you and the two of you just glared at each other in turgid, furious manliness?

Shia LaBeouf weirdly shows up at play he quit >>

LaBeouf “clarified” a bit: “I think in a room, that became a hard thing to deal with, and I think that when you have tension as men, that’s tough until July.”

Letterman suggested an alternate scenario: “Alec went to the producers and said ‘I can’t take it another day, fire him.'” LaBeouf nodded and said “I think that might have been what happened.”

“He’s a good dude and the show is terrific, I got nothing bad to say,” LaBeouf said, holding up his hands in a “peace” gesture, but said a Baldwin reconciliation would be “tough” to pull off.