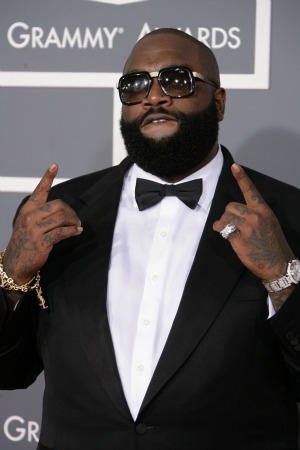 Rapper Rick Ross has released a new song giving advice on how to romance your lady even if she doesn’t want to be romanced: Drug her, get her dunk and rape her while she’s unconscious so she never knows what happened.

“Molly” is slang for the drug MDMA, or Ecstasy.

Now outraged fans and foes are calling on Reebok to drop Ross as a spokesman. An online petition states, “His lyrics aren’t vague, he’s not hinting that he raped a woman — he’s clearly and proudly saying that he drugged and raped a woman who was not capable of consent.”

“By holding Rick Ross up as something to aspire to, Reebok is sending the message that raping a woman is cool — and that’s a dangerous message to send to the boys and young men that Reebok markets to. This is what rape culture is.”

Ross, the recent victim of a drive-by shooting, went on the radio in Louisiana last week to defend his lyrics and call it all a big misunderstanding.

“Woman is the most precious gift known to man. And there was a misunderstanding with a lyric, a misinterpretation,” he told 93.3 in New Orleans.

“I just want to reach out to all my queens that’s on my timeline, all the sexy ladies, the beautiful ladies that have been reaching out to me with the misunderstanding: We don’t condone rape, and I’m not with that,” he said.

But it could be a case of too little, too late: 50,000 people have already signed the petition.

Reebok has not yet commented.