Once considered one of the biggest new indie bands, Vampire Weekend have grown up and are headed home. Actor and filmmaker Steve Buscemi will be there to document their homecoming show in NYC. 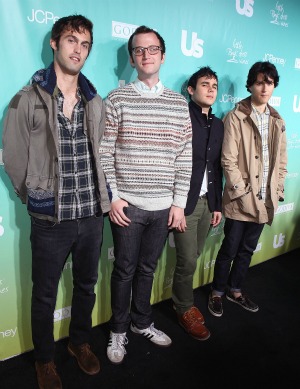 Vampire Weekend will release their much-anticipated album Modern Vampires of the City on May 14. But a few weeks before, they’ll live up to the name by performing at the Roseland Ballroom in New York.

The April 28 show is part of the “American Express Unstaged Series,” and will be a sort of homecoming show for Vampire Weekend. But what makes it especially interesting is actor Steve Buscemi will be at the show creating a documentary of the band.

“Playing a hometown show is a really intense and great experience,” bassist Chris Baio told Jon Blistein with Rolling Stone. “We haven’t played a full New York show in two and a half years, so we’re gonna be really well-rehearsed.”

The show will also be an attempt by the band to get all the bugs out of their new songs, since they’ll have only played them in front of a large live audience a few times. Baio said the show will feature about half the songs from Modern Vampires of the City.

Buscemi is currently working with the band to plan the show and the film that will come out of it. The director and band are also working on some extras to prepare people for the date.

“Along with rehearsals, they’ll film some bonus documentary footage that will be released in the lead-up to the concert (which may explore a distant family tie between Buscemi and Baio),” said Blistein.

The band will also be playing both weekends of the Coachella Music Festival before the April date, but they seem to be most looking forward to the New York City show.

“He really is a great director,” Baio says of Buscemi. “Growing up, I was a huge Sopranos fan and one of my favorite episodes is ‘The Pine Barrens,’ which he directed. Also, I just realized this morning he directed the ‘Leap Day’ episode of 30 Rock last year; that’s one of my favorites. I feel safe in his hands.”

Buscemi’s son Lucian and his band Fiasco opened for a 2008 Vampire Weekend show in New York City, and Buscemi himself has been a fan since seeing the band at SXSW in 2008.

The city is an important part of the band’s identity, and they’re happy to be coming home. They explain how the new album shows their feelings for their hometown.

Review: Mumford and Sons’ “Whispers in the Dark” video >>

The April 28 show at the Roseland Ballroom will also be streamed on YouTube, Vevo and the American Express Unstaged website.