Individually, Luke Bryan and Blake Shelton are rockin’ their ways through two solid country music careers. Together, they’ll be unstoppable as co-hosts of the ACM Awards. 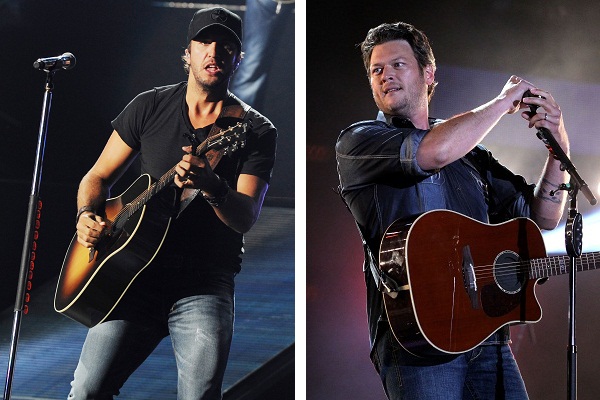 The Academy of Country Music Awards is right around the corner and we’re excited watch what will unfold. Not only will beautiful trophies be handed out to some of our favorite country singers, but the entire night will be hosted by two of the funniest guys in Nashville: Blake Shelton and Luke Bryan. Aren’t the ladies worried they’ll steal the show? These two cuties are definitely the perfect hosting duo.

Luke and Blake are on the same page when it comes to how they represent themselves. They leave the “bad boys of country music” title to the likes of their buddies Eric Church and Jason Aldean and settle for something a little more mellow. Don’t let that fool you, though. The guys still know how to party. If you need evidence of that, look no further than their most popular singles! Luke’s “Country Girl (Shake it for Me)” is all about having fun and letting loose, just like “Hillbilly Bone” which Blake sang with the tall and handsome Trace Adkins.

They have plenty to joke about

If making fun of the beloved Taylor Swift or man-crushing on Tim McGraw gets old or falls flat from the stage, the guys can always fall back on talking about married life. Sadly (for us), Blake and Luke are both married men. Man Candy-worthy Blake is married to the gorgeous and talented singer Miranda Lambert, so we’ll be keeping our fingers crossed for a duet. Meanwhile, farm boy Luke Bryan (whose new album just debuted at #1) married his college sweetheart, Caroline. Since Miranda will definitely be in the audience, the guys can only complain about their wives for so long. After all, Miranda’s sung enough break-up songs to know how to end things properly.

Luke and Caroline have two little boys, Bo and Tate, so maybe Luke can offer Blake some advice on fatherhood for when the time comes for the Sheltons!

Their backgrounds will keep them bonded

Like most people who live in Nashville, Luke and Blake are transplants. Blake is originally from a relatively small town in Oklahoma, called Ada. Luke has a similar small-town background and actually grew up on a farm in Leesburg, Georgia. Both singers moved to Nashville when they were fairly young. One of Luke’s first songwriting credits was “Good Directions,” performed by Billy Currington. Meanwhile, Blake found he was writing for himself right off the bat. They can both still count television as one of the biggest reasons so many people know their names. Early in his career, Luke Bryan made an appearance on Celebrity Apprentice where they made him over to help promote him. That brought him to many people’s attention. Meanwhile, though, Blake had been around for quite a while and already seen mild success — his work on shows like Nashville Star and The Voice definitely helped bring him to the forefront of the music world.

Which co-host made our list of shirtless country cuties? >>

Last year Ellen sent Luke Bryan to be their CMA red carpet correspondent. While there, he interviewed and teased Blake Shelton. During an Ellen-prompted game of Truth or Dare, Blake decided he’d kiss Luke. Let’s just say they have plenty of chemistry!

What do you think? Are you excited for the ACM Awards? SheKnows is and we can’t wait to bring you all the latest coverage from the show.