Lindsay Lohan got the Twitterverse up in arms last night after she posted what seemed suspiciously like a pregnancy announcement. 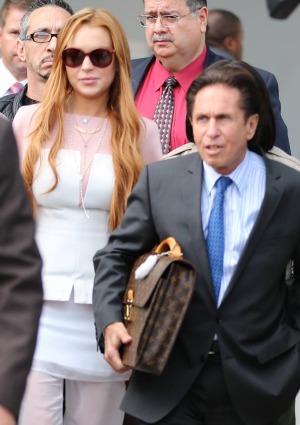 Fans and followers of Lindsay Lohan were shocked by a later night announcement she made on Twitter yesterday, seeming to announce there is a bundle of joy on the way.

“Its official. Pregnant…” she tweeted just before midnight.

What’s that? Just before midnight? So it was still April 1? As in April Fools’ Day?

Or perhaps Lohan, who is facing 90 days in rehab in a plea deal with L.A. prosecutors, was simply sharing the joyous news of a friend?

Regardless of what may or may not be her delicate condition, the troubled actress has decided to extend her stay in Brazil where she was promoting clothing line John John Denim and hiding under nightclub tables, for which she was reportedly paid a cool $100,000.

Although she was supposed to return to the U.S. yesterday, sources told E! News she was desperately trying to extend her trip and keep partying.

“She is staying against everyone’s advice,” the insider said.

It is certainly against the wishes of her estranged father Michael Lohan, who penned an angry missive to her booker Mike Heller — who just happens to be the son of her lawyer Mark Heller.

Daddy Dearest wrote in an open letter, “I am telling you now if you are with Lindsay in Rio or you booked it, and anything happens to my daughter, I am holding you personally responsible. Judging from what has happened to in the past, and the way she looks down there from the pictures in the media, it’s not a good thing. If you have anything to do with her being there, it’s on you. Count on it.”

But lawyer Mark Heller says Lindsay is a victim of circumstance who does not have a problem with drugs or alcohol, despite arranging the rehab plea deal for her.

“She does not need rehab,” he told CNN last month. “Lindsay doesn’t have a problem with alcohol and drugs. Lindsay has other types of issues that are being dealt with.”