Aw! Our little Lucy from 7th Heaven is all grown up and a mom! 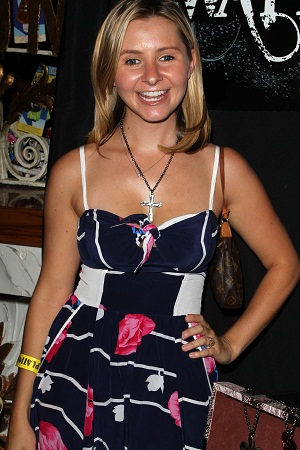 7th Heaven actress Beverley Mitchell and husband Michael Cameron announced the birth of their first child on Monday! Baby girl Kenzie Lynn was born in Santa Monica, California, on March 28, and weighed in at only 5 lbs., 15 oz. How precious!

“We have fallen instantly in love and can’t wait to be the best parents we can to our beautiful little angel,” she told People.

She must have known what was in store for her Thursday because earlier on, Mitchell sent out a giddy tweet to her followers, “Wishing everyone a truly beautiful day! Sending out crazy love to the world!! A truly gorgeous spring day!!! #blessed #happy #grateful.”

Kenzie is the couple’s first child and when Mitchell spoke to Us Weekly just two weeks prior, she was brimming with excitement. She told the magazine that while she and her husband had a small list of names they both liked, they weren’t going to make the final decision under after their daughter was born.

Bev’s buddy Jenna is also pregnant (and so in love with her hubby!) >>

“We want to meet her first,” she told Us at the Biggest Baby Shower Ever event. She went on to add, “I already know she’s got tons of personality in there, because she’s definitely an active one: turns, kicks, jabs, the whole nine yards!”

What will Beverley do if her first daughter is just as wild now that she’s out? That’s easy! Mitchell will just have to plan plenty of play dates, as some of her friends are also expecting babies.

“I’m actually the first one out of my closest friends to have a baby, but I’ve got a few right behind me: JoAnna Garcia, Jenna Dewan, Jamie-Lynn Sigler,” she said. “Hopefully I’ll have a lot of tips for them. They’ll see how I get along and then we’ll figure it out.”

California is a crazy place. Those Hollywood mamas have to stick together! To catch up with Mitchell’s acting career, make sure to check out the newest (and finale) season of The Secret Life of the American Teenager. We’re sure she’ll turn up eventually!