The Mortal Instruments: City of Bones pits Lily Collins against Jonathan Rhys Meyers. Her character is the key to stopping a supernatural war from breaking out. Watch as Collins and Jamie Campbell Bower try to save the world. 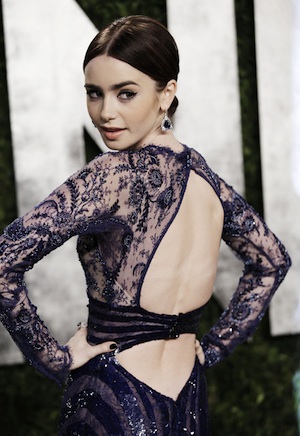 The video comes shortly after the film’s panel presentation at this year’s WonderCon. Over the weekend, the Anaheim audience got first dibs on the trailer that offers new footage from the movie.

The film is based on the 2007 novel City of Bones written by Cassandra Clare. It’s the first of six fantasy books targeted at the young adult audience. Thus far, five have been published. The most recent installment was released last month, while the next entry is scheduled for March 2014.

The movie centers on a 15-year-old named Clary Fray. She’s a typical teen, whose world is about to be turned upside down. Her overprotective mom (played by Game of Thrones’ Lena Headey) goes missing and she encounters three teenagers covered with strange tattoos and wielding bizarre weapons.

They’re a trio of Shadowhunters, whose job is to find and kill demons. To regular humans, they’re invisible, yet Clary can see them as clear as day. Why is that? It turns out her and her mother might not be as typical as she thinks.

Watch the new trailer below:

The Mortal Instruments: City of Bones opens in theaters Aug. 23.

What do you think of the latest trailer for The Mortal Instruments: City of Bones?