Up for Vocal Event of the Year at the ACMs, Kelly and Vince’s collaboration has a charmingly smooth vibe. 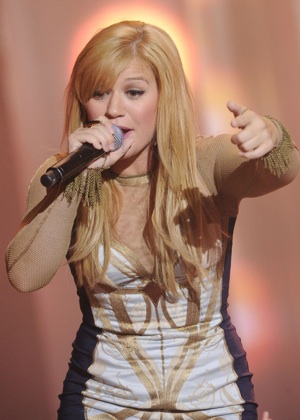 If Kelly Clarkson wasn’t such a sweetheart, I would say she’s a player.

Well, it seems everything she touches turns to gold, and everyone she collaborates sounds like a musical marriage that we should’ve seen coming. Hey, who knows, maybe musical polygamy can be the new thing.

Have you heard? The ladies love Miss Clarkson >>

Her latest highlighted conquest is with country star Vince Gill, thanks to their nomination for “Vocal Event of the Year” at this year’s Academy of Country Music Awards.

Garnering attention both from fans who watched the performance of the single at the CMAs and myself, this single has the charm of a country song but an effortlessness reminiscent of the famed Bee Gees.

Who else is nominated this year at the ACMs? >>

Dare I call this a country oldie?

Yes, I dare. It’s a medley that you can envision yourself driving down the highway to in your convertible, wind blowing through your hair, and a lover by your side. It has the homely warmth you would expect from a country song but the upbeat and spirited nature of the ’70s. There is wisdom in the past and Kelly and Vince have found a way to tap into that and place a mature overtone amidst this romantic hit.

Sure, it’s not like the Jason Aldean duet “Don’t You Wanna Stay” (can you really top that?) but at the same time it’s not even comparable. Country music has so many different facets, and this collaboration shows the different (cowboy) hats she can wear.

I kid. But in all seriousness, Kelly sounds a bit timid and it’s a different sound for her. I commend her constantly for powerful anthems that get a rise out of your soul even when it’s gone into hibernation from pain. I take a step back now, looking at this American Idol alum with a new respect. She’s a chameleon, who can conform to musicians and complement them seamlessly — which you can hear in full force by the time the chorus emerges.

In a quote featured in The Tennessean, Clarkson mentions, “It’s sexy retro-country, and as soon I heard it, I put the song on hold. My goal as a singer is to capture the sentiment of a song and emote what the feeling is.”

Kelly is quite patriotic, isn’t she? >>

Don’t think for a second I forgot about Vince Gill. Props to him, too! It’s not exactly an easy feat to sound so youthful when you were born in 1957 and your female musical counterpart is a 1982 baby. Age clearly isn’t nothing but a number, and their feat hopefully is rewarded this year at the awards ceremony! They are certainly strong contenders, because quite frankly — how could you not be swooning for this?

The track was produced by Dann Huff, and written by Blu Sanders, Natalie Hemby and Lindsay Chapman.

Want more music? Check out our other reviews: