Beloved in the sci-fi community for her turn as Officer Dualla in Battlestar Galactica, actress Kandyse McClure returns to television with the new Netflix fantasy thriller series Hemlock Grove. The South African stunner opens up to us about roaming around in the woods, her girl crush on Famke Janssen and much more. 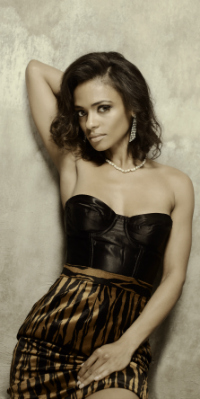 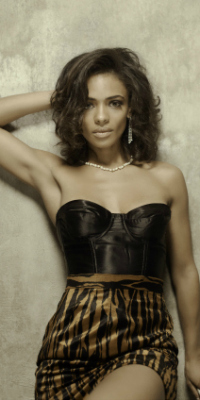 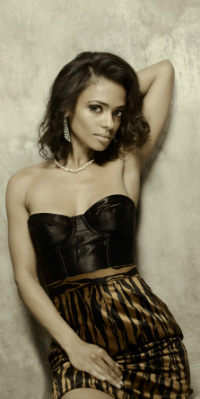 Kandyse McClure: I’ll take it! (laughs) I’m kind of a giant nerd myself, so I think it’s just being in good company! I’m a big fan of the sci-fi genre myself. I remember watching Star Trek when I was young and really wanting to go to space, or reading sci-fi novels that my aunt would hand me down. My aunt is very prevalent in the sci-fi community on the blogs and such, and she’s like, “You know, I get a lot of credit because you’re my niece!”

SK: Yep, it’s official, then — you’re beautiful, smart, and actually like the genre. Nerdy guys worldwide will now cling to the hope that women like you actually do exist.

KM: Hey, I love a nerd! A nerd is my favorite thing. My fiancé is a nerd — we’re nerds together. They make good marriage material, I must say! You know, I also love the sci-fi genre because it’s afforded me a lot of opportunities I may not have gotten in quote-unquote real-life TV. Really interesting things have happened in the genre, like the first interracial kiss. It seems that in true sci-fi and fantasy genre, you can talk about controversial things — things that elicit a response in people. I think that is what’s really great about the genre.

SK: Did you meet your fiancé through the business?

KM: Sort of… A friend of mine was shooting a music video for a local artist, and he [the fiancé] was there playing one of the characters in the video, and they’d asked to use my apartment as one of the sets. I was at work, so it didn’t matter to me, but I came home and he was sitting on the couch and I thought, “Oh, he’s cute.”

SK: That’s nice, you got to envision what he would look like in your place before you ever started dating!

KM: Right? I was like, “Oh, you go really good with the decor!” (laughs) So yeah, I guess that’s industry-related. It’s sort of like music and television coming together… it’s quite poetic, actually.

SK: Definitely! You have such a fan base for your role as Officer Dualla on Battlestar Galactica. Do you still pay homage to the show by going to conventions and such?

KM: Battlestar Galactica will always be a part of my life — it changed my life. It’s certainly what people know me for, and I also love the community and the people that I met and continue to meet by going to conventions and such. Not a week goes by where someone either recognizes me or says something, and it’s always really kind and often profound. It’s nice to know the show affected people in personal ways, as it did me.

SK: Is it true you’re reuniting with one of your fellow Battlestar Galactica castmates on Hemlock Grove?

KM: This is pretty amazing, actually, I have to say, even for the two of us. Aaron Douglas, who played Chief Galen on Battlestar, is also on Hemlock Grove. What I find so sweet about it is we actually have dialogue together — you know, we’re a little tag team on much of the show. We never said anything to each other on Battlestar! 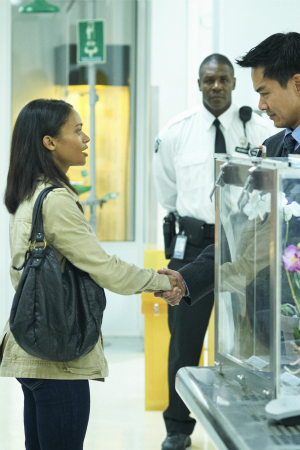 SK: So, how did Hemlock Grove come about?

KM: It was a regular audition! I got the call from my agent, and I immediately loved the material that they sent. There was just something about the character, Dr. Chasseur, something mysterious. She wasn’t all she seemed to be, and I’m always really attracted to those kinds of roles — people with a secret. I just walked in there and I did the audition, and I felt really good about it because I’d had so much fun in the room. I’d made some quirky choices, and they were really receptive to them.

SK: You play an animal behaviorist with a PhD. Not your typical TV pedigree. How does that fit in?

KM: People initially think that the heinous attack on this young girl is a wild animal. Dr. Chasseur is brought in to sort of hunt and track this thing to see if they can get some eyes on it and figure out if they can take it down. Since nobody in town has a handle on it, they bring in the resident expert. She has a PhD in predator pathology, which is really like being in the mind of a predator. I’ve read some books on hunting and tracking, and they talk about putting yourself in the animals’ footsteps essentially to kind of get the psychology of it. So on the surface, she’s sort of a glorified dog catcher, but we come to find out she’s got interests and passions that run a little deeper than the surface.

SK: Outside of reading books on hunting and tracking, how did you get into Dr. Chasseur’s mindset?

KM: Brian McGreevy [the author] was really helpful, of course. First I started with the novel, and how he saw Chasseur in the novel, and how she would be developed through the series. Chasseur has a real sense of awareness of her surroundings. I did a lot of walking in the forest and looking at footprints and trying to figure them out. Was this person running? Were they relaxed? I love stuff like that! I love being out in the wild, being self-sufficient and being able to see clues in nature.

SK: If they ever do a celebrity edition of Man vs. Wild, I think you’ve got a leg up on the competition.

KM: (laughs) I could totally be on one of those shows! You know, doing those things just taught me a real awareness of the interconnectedness of things. And really, stories — being able to read stories from the landscape I thought was a fascinating idea.

SK: Famke Janssen of X-Men fame stars alongside you. I’ve heard she’s pretty impressive. Did you ever get starstruck around her?

KM: I did have a little moment, yes — I will admit it! I mean, she is this statuesque beauty, and she has incredible presence. Her beauty and her presence belie a fun, really playful goofy side I got to see on set, so that sort of broke the tension and we were able to really be present together in the scene. But to observe that turn in her — for her to go from her playful personality and then just drop into the weight of the character, Olivia Godfrey, was so fantastic to see as an actor.

SK: Ha ha… is it safe to assume he has the same magnetic presence as his brother, True Blood’s Alexander Skarsgård?

KM: Absolutely! I’ve never met any of the other Skarsgård clan, but they’re certainly infamous and have major screen presence. And Bill is no different — he is this tall, smoldering, charming young man. He’s a little young for me, but I can certainly see how he does well.

Alexander Skarsgård: No, I won’t bite you >>

SK: Much like those smoldering Skarsgårds, your roots are in another country. Can you tell us about your childhood in South Africa?

KM: My mother and I immigrated when I was about 11 or 12 years old to Canada, but I go back to South Africa often. I often think, “What would I be if I were still in South Africa?” I still love my home — I think there are so many incredible, beautiful, unique things about South Africa, but I am definitely so grateful for my life in North America that allows me to pursue my passion and artistic expression as a career. It would have been more difficult had I stayed in South Africa.

SK: I read that when you were a child, your mother took you to a government agency where you had to have your skin color and your hair texture measured. Were you always aware of that caste mentality?

KM: Oh, absolutely. Everything about apartheid South Africa was designed to remind you where you fell in the hierarchy or what place you were meant to occupy. The skin testing and the hair testing was a function of the Department of Home Affairs in South Africa — they had to classify you in order to know what kind of education you were going to get, what kind of job you were going to have, what your opportunities and potential were going to be… and that’s really something to wrap your head around.

SK: Was it hard for you to adjust to a new ideology?

KM: Sometimes I have to remind myself of it. Sometimes it’s easy to slip back sort of into a collective consciousness, a psychology that you were raised with — to believe something about yourself that wasn’t true, that you were limited in some way. And I have to remind myself that that is not the case. I’ve come a long way, and I am in a position where I control my life.

SK: What ultimately prompted your family’s move from South Africa?

KM: When you don’t know anything different, you just accept things the way they are. My mother was never accepting of it, which is why we left. (laughs) She was always very active within the community politically… very outspoken. She could see our future folding out before us, and she didn’t like what it looked like. So she was very courageous — the most courageous woman I know!

SK: She sounds amazing! I was also raised by a very strong, independent woman, and I always dream of the day when I can repay her for the sacrifices she’s made for me. Have you made any grand gestures toward your mom since your career took off?

KM: It started out as little things. The first series I booked, my mom and I went to Ikea and I bought her a real bed  — one that we didn’t get as a hand-me-down or from an alley or garage sale. An actual brand-new bed! (laughs) I just remember how excited she was about that! My mother is a teacher, and it’s a really tough job. They don’t get paid nearly enough for the amount of work they put in, and she’s been working steadily toward her PhD in the psychology of education, too. I would love to just be able to have my mom not work and finish her dissertation and write a book, but I think what she’s doing in terms of transforming education and really preparing young people for the world is so timely and so necessary. I would love to be able to give back to her more… we’re working on it!

Watch a preview of Hemlock Grove