Who will return for the 50th anniversary episode of Dr. Who? Only your two favorite lovebirds, of course! (But how?!) 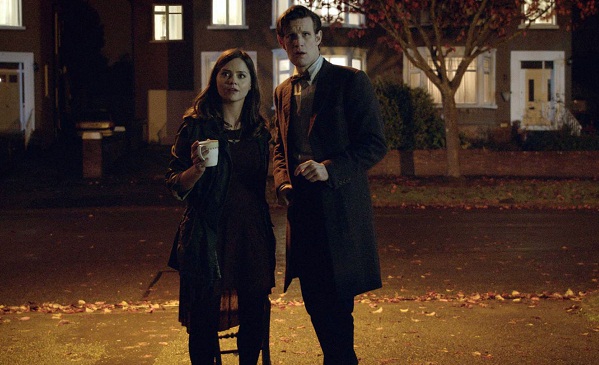 Whovians: Prepare to freak out. Rose and Ten are returning to Doctor Who!

Just before Doctor Who‘s spring premiere, BBC America issued a press release announcing the return of Billie Piper and David Tennant to the show as part of a very special 50th anniversary episode. The last time we saw either of the pair was during Tennant’s last episode, “The End of Time,” in January 2010. Shortly after Rose was given her own version of the Doctor, Tennant’s version of the doctor (the Tenth version) regenerated into Eleventh… or, Matt Smith.

The current version of the Doctor and his slew of companions has been 50 years in the making. Over the years, we’ve seen the Doctor fight Who-created enemies like the Daleks and the Cybermen, but we’ve also seen him come face to face with Hitler, hit on the Queen, ride dinosaurs, and survive Pompeii. He’s done all that while always toting along a companion… usually a pretty girl, like Rose Tyler.

Rose Tyler (Billie Piper) arrived on Who in 2005 when the show resurfaced after a decades-long break. She met the Ninth Doctor while working at a shop and, for a brief moment, her life completely changed. Last we heard, she was back to working in a shop, but in an alternate dimension, and beginning a life with a much more human version of Ten.

Fans may have gotten a sneak peek at her return, though, during Saturday night’s episode.

When the Doctor’s newest companion, Clara Oswald/Oswin (who’s not even officially accepted the role yet) found herself in need to tech support, she phoned the TARDIS for help. When the Doctor asked her how she got the number, she claimed the girl at the shop gave it to her. Who else could possibly have the Doctor’s very special TARDIS phone number if not for Rose Tyler?

That begs the question: What’s Rose Tyler doing back in our dimension? We have two theories:

One we can’t possibly prove is that The Doctor and Clara/Oswin aren’t in our dimension at all. The Doctor hops around so much and the TARDIS is known to have glitches, especially after it shifts and changes, which we know recently happened. Isn’t it possible he’s found himself back in Rose’s world instead of ours?

Peter Jackson wants in on Who action >>

Another theory: The Daleks have brought Rose and Ten back. It sounds crazy, but everything about Doctor Who is crazy, right? In case you forgot, the Doctor first met Oswin when her mind/spirit/something was trapped inside a Dalek. That’s why he’s so interested in her. She’s clearly a plot by the Daleks… could the return of Rose and Ten be, as well?

We also know the Cybermen are set to return. Could they be in on this?

If all of this weren’t enough to send us over the edge, BBC also announced the legendary actor John Hurt would also make an appearance in the episode! You’ll recognize Hurt as Mr. Ollivander from the Harry Potter series, as well as V for Vendetta and Spaceballs.

If we had two hearts, they’d both be beating out of our chests in anticipation!