Mark Wahlberg and Dwayne Johnson take us to the gun show on April 26 when their careers as bodybuilders turn criminal. 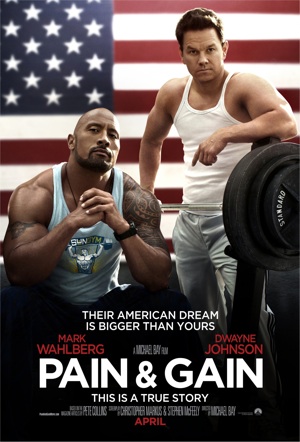 No pain, no gain is something Dwayne Johnson and Mark Wahlberg know a little something about in building their muscle physiques. They pump us up playing bodybuilders who go to any extreme to get the results they want in the new muscle movie, Pain & Gain, based on a true story

Anthony Mackie also joins Marky Mark and the Rock in using muscle power in an extortion ring and kidnapping scheme. After all, how are they going to earn money and be successful if they spend all their time pumping iron? How about taking some classes and going to school to exercise their brain power instead? No pain, no brain!

Wahlberg’s character, Daniel, sets out to live the American Dream, believing that if you work hard, you can have anything you want. Inspired by motivational speaker Ken Jeong’s character Johnny Wu, he finds the courage within to be something better than his body. Frustrated by Victor (Tony Shaloub) and by people who cheat to get, the protein pack is on the offense. They may be big, but they’re not dumb. Daniel assures Paul (Dwayne Johnson) that “I watch a lot of movies, Paul. I know what I’m doin’.”

Dressed in ninja and turtle costumes equipped with Tasers, they look like a bunch of crazy Wondercon fans out on the town and up to no good. This crosses over into the scary genre. We wonder if director Michael Bay had anything to do with the ninja and turtle theme because he’s the producer on the upcoming Ninja Turtles movie.

So who is the big and beautiful blonde to join the manly cast? Rebel Wilson’s character Ramona plays a sexy nurse who seduces Anthony’s character Adrian.

Will these macho men in kiddy costumes be able to make something of themselves? Will their hard work pay off? Let us know what you think!